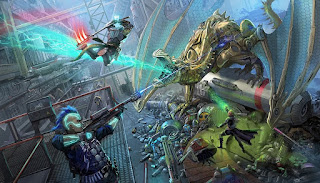 After a few week's absence I am ready (finally) to run more Starfinder. I made a few executive decisions:

1. I chopped up the Fly Free or Die adventure path to extract some interesting bits, then went back to my original campaign premise to resume what I want to do, incorporating the worlds and ideas I've been developing over the last four or five Starfinder campaigns I've run in the last few years.

2. I took a real "this is Pathfinder but in Spaceeee" focus, with the idea that I should design the campaign the same way I would a Pathfinder adventure, rather than the more open way SF games tend to command (ala Traveller). I've got "stuff" I can use as needed should players defy expectations, but the goal is to provide a sweet motivation for the players to want to pursue the interesting content I spent the most time on. Then, in true form, that content is designed for the most flexibility in terms of how they approach it.

3. The Big One: I made a serious, conscious effort to avoid a problem I decided was what was causing issues for both my Starfinder game previously, and in fact may have been what nixed my White Star attempt last year: I'm taking it seriously (playing it straight, in other words). There's a temptation to lean in to weird elements of space-fantasy settings and notice when some things that are happening appear to be tropes, or derivative, or cliche, or just plain silly.

White Star has this problem at times because a majority of its content is derived from popular scifi settings....it's the Qinlon/Canneck/Yabnab/Rawrr problem; the game lampshades in its own naming convention that these are really klingons, daleks, ewoks and wookies. As a result, using such content inherently feels derivative if you don't figure out a way to change it up a bit. When I ran my original couple of White Star campaigns I avoided this issue by making qinlons more like in-control versions of Firefly's reavers or the wastelands goons of Mad Max, making the cannecks more like horrifying Von Neuman machines that destroy worlds than anything resembling the silliness of daleks, and in those campaigns it was the original edition of White Star so I could ignore yabnabs and rawrrs (something the Galaxy edition makes harder to do....yes you can, but your players can't unsee what they saw, y'know?)*

Starfinder has this to a certain degree as well. It's got some strange setting assumptions that can be easy to lampshade if you aren't careful, since the rules themselves don't really prepare the GM for the hows and why's of the implied Pact Worlds setting. These include:

The Gear Economy - why a level 1-20 scale of increasingly expensive but useful gear exists as a thing in the context of the setting;

The Starship Economy - why starships are not part of the economy and are part of the leveling scheme (though some rules in Fly Free or Die help muddy that water a bit);

The Fantasy Elements - explaining a mix of fantasy and scifi tech is not the issue, it's clarifying why there are elves, dwarves, orcs, drow and other fantasy species spread out throughout the galaxy; removing these species is possible but creates gaping holes in the toolkit infrastructure of the game. The game itself treats the presence of such species in space in strange and unusual ways. For an example look no further than ghouls to see how a horrific cannibal undead monstrosity gets turned in to a semi-docile workforce that just wants to get past its ancient reputation while working dangerous jobs living beings can't. Sometimes this works well, but other times it just feels a little....cartoony? Goblins, skittermander and other elements pose problems when a GM wants to run a game that feels like a universe that could exist outside of a cosmic multimedia blender.

My solution is to lean hard in to the same thematic elements that make Pathfinder games fun, but now with more space stuff. So rather than delve into the mundane elements of how a space trucker economy works and how space thieves guilds function (the subject of Fly Free or Die AP) I'm going to stick more closely to the idea that this is what a Robert E. Howard tale would look like if it were written in a science fiction universe filled with both fantasy and magic (okay yes we have Almuric to look too, sure**). The assumption I am taking is that there is infrastructure to this spacefaring society in the Starfinder universe, but its just barely enought o sustain some sort of trade network and industry, and the vast majority of worlds are teeming with strangeness, hidden mysteries and horrors, and that the underlying risk in this universe is precisely the same as it tends to be in a straight fantasy setting....just with lots of additional tech.

This means that a nontrivial percentage of worlds in this version of the Starfinder universe are just techno-feudal societies where the noble elite remain in charge, but the resources are hoarded or squandered and rarely do you see something resembling a normal futuristic society that might fit in Traveller. I'm going to assume that movies like Forbidden Planet, Zardoz, Planet of the Apes, Star Wars, Star Crash, Krull, Starbeast are more informative of the thematics of this universe than more realistic science fiction. I can even assume that the very D&D/Pathfinderish ages-old conflict between Law and Chaos informs this universe at its core, explaining much of how the perpetual churn of social, technological and magical conflict continues unabated.

Anyway......that is a long way of saying I don't want "docile orc mechanics, ghouls who just want to be useful, gnomes being gnomes and skittermanders and goblins being themselves" to dominate the overall feel of this campaign. I'd like the campaign to feel weird, old school, and intelligent...an homage but not derivative, and genuine instead of a parody or farce. If a goblin is going to get up to something, I'd like to think it's because there's a genuine culture of goblins in the woodwork, laboring under a reduced social status while living off the wreckage of high tech and high magic societies above, and not just because we need a quick encounter with some slapstick. Likewise, ghouls aren't just misunderstood humanoids suffering under centuries of strife, but a deformed caricature of man wrought in necrotic energy, undead beings who struggle on a good day not to consume the flesh of the living and shun the light, and a handful strive to be seen as some semblance of what they were in life, while far more find solace and freedom in the cold darkness of space.

*I know that there is a lot of fun to be had by leaning in to this stuff (playing for the derivative content as a focus), but you can't really mix that sort of thing with a serious campaign (ime).

**That, however, is planetary romance which is actually a different kind of genre.

Posted by Doctor Futurity at 1:13 PM