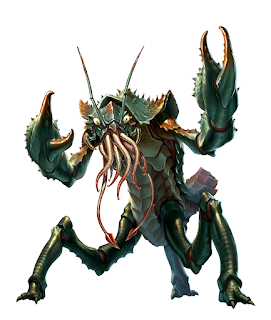 I had been reading and responding to a post at Enworld on hexploration when I realized it would be fun info to also post here:

I run hexloration campaigns in PF2E per GMG rules pretty consistently, but what I do with the encounter tables is create slightly more elaborate ones that are based on party level. So a chart for CL 0-2, CL 3-4, CL 5-6, CL 7-8, CL 9-10 etc. Then, when I check which chart to roll on for the encounter I roll a positive D4, a negative D4, add the first and subtract the second to the currently average party level, and then use the indicated chart. If the encounter is for some reason meant to be easier or more difficult just substitute a smaller or larger die as appropriate. Example: an easier random result would be challenge level -1D6+1D4 added to APL (average result would be APL-1). Tougher encounter? -1D4+1D6 generates APL+1 on average. Then, just work out a range of encounters but modify the # of foes by the actual expected toughness.

That said....the GMG advises an occasional deadly or impossible encounter in the mix for hexploration, but my suggestion is to broadcast in some means how lethal the encounter is (whether it's the PCs seeing a higher level beast cleave a cow or deer in two in one hit, a bloodied paladin telling them to flee, or even just an easy DC intuition roll on Perception or Nature telling them this is a certain death situation.) My players have a habit of sticking around and fighting until they suddenly realize they bit off more than they can chew, so putting some tells in to your encounter which give them fair warning is a noble thing to do as the GM. Likewise, the GM in PF2E needs to be nice and include at least as many easy encounters for the group to tread on.....such design flies in the face of conventional hexploration wisdom I suppose, but you are the one designing the charts so you have control over this stuff, and I advise just baking it in, providing for a nice fair range of difficulty from trivial to deadly.

Here's a sample chart, designed for a region that a group of level 1-5 can explore with some mix of risk and adventure, skewed slighty toward the easier end:

Written as it, this gives a spread on chance of encounters like this:

Party APL 2: Can encounter anything from CL 1 to CL 5 on the charts, with an average chart roll being on the CL 2.

The list caps out at CL8+, but the GM can of course start adding new charts if desired. The net result of these charts is you have the potential for trivial (non threatening) encounters mixed with a risk of a really deadly, even impossible encounter. That same encounter, once escaped, can later be something the group tackles at a higher level.

You might wonder how I arrived at the # appearing....pure GM intuition, take them with as much salt grains as needed.

Posted by Doctor Futurity at 3:39 PM