I've been prepping a lot of Gamma World, and in the process have found plenty of new ideas in art and other sources for new Gamma Worlds beasts. Here then is the first of them, for GW 1E: 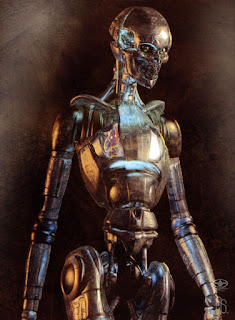 Anomaly
AC 4
Move 12
Hit Dice 15 (75 hit points)
Power Source: broadcast; solar powered; internal fusion core (112 year life) (pick any two)
Sensors: standard, infrared, ultraviolet, radio, maser
Control: cracked (removed controls); still responds to voice commands from PSH (35% chance)
Construction: the first sighted Anomalies were distinguished as "raw" android forms, missing humanoid imitative flesh and reflecting only the raw chassis. Later models show a great deal of modification due likely to necessary repairs with junk on hand.
Anomalies are rogue artificial intelligences using robot or modified android bodies. They are inimical to humanoid life though they may irrationally protect pure strain humans. The stories speak of the earliest anomalies appearing near installations of the ancients known for lethal zones and other violent robot forms. Scholars of the ancients think these may be "drones" with the intelligence of the AI hive mind, sent out to serve as scouts and scavengers, but over time they became increasingly dangerous, attacking mutants on sight.

Anomalies do not seem to be built with weapons and instead rely on scavenged goods. As such, they typically have access to what is available, though that is often (initially) a battle axe (1D8, +2 due to strength) and a laser pistol (5D6). After a while, the anomaly often loses or recycles these weapons and ends up relying on cruder weaponry it salvages. 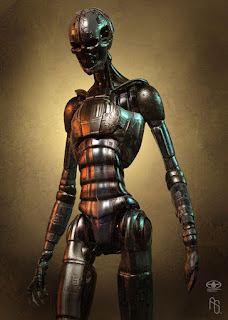 Anomalies are Level 4 (Health 16; Armor 3), armed usually with laser pistols (4 points) or crude melee weaponry forged from scrap (6 points). Anomalies are highly resistant to intellect-based attacks (level 6 intellect defense) and immune to effects such as poison and gas unless it would directly affect the metallic body.

Posted by Doctor Futurity at 3:14 AM