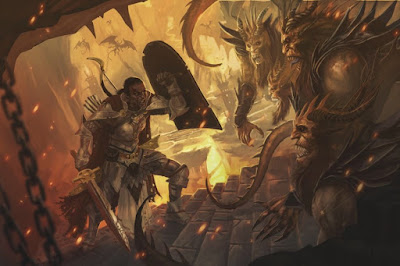 My prior post felt a bit like a gripe against Pathfinder 2nd edition in a way I'm not really in full alignment with. There's a bit of frustration there but it's mostly because I (being an old, crusty gamer stuck in his ways) get annoyed when a new thing pops up and demands I read it instead of relying on my old sense of familiarity. Such is the main issue with the way skills and skill feats work in Pathfinder 2nd Edition.

Here's a few examples: the first one is Perception, which they deliberately took out of the "skill ecology" of the game. Perception is now essentially a special stat, which is not actually a bad way to approach it (and is in alignment with how perception has worked --often as a houserule-- in prior editions back to 1E's Unearthed Arcana).

The problem is, Perception is still essentially tied to "skill actions." For example: if you want to discern whether an NPC is telling the truth or not (this happens plenty of times at my game table), the way to do it is to roll deception for the NPC (lie action using Deception skill) against the PC's perception score (which not only covers awareness of the senses but apparently also awareness of the character and tone of others).

A second problem is that, while the book is exceedingly well organized for the most part, it has weird moments where the procedure for an action is buried in the details. For example: lying is covered as an action you can do, but discerning lies is buried within the text of lying. So unlike other iterations of the game, you don't have a "Intuition" or "Sense Motive" or "Insight" skill or feat to go to; if you want to detect lies you need to read up not on detecting them but how to lie. This seems like a tiny oversight...even a "Sense Motive" skill action that just says "see Lie" would have helped.*

Skill feats then come in to play to allow a player to distinguish their character's abilities in more detail. Under this system, the way to get better at detecting lies is to actually get trained in deception yourself (learn how to tell lies), then pick the skill feat "Lie to Me" so you can use deception to detect lies instead of your perception score. This means that perception is really just everyone's "baseline" ability to detect lies or see/hear/detect things. The skill feats are where you can distinguish this stuff in more depth.

A really good skill example of how this granularity breaks down is the Society skill. On the surface society lets you recall knowledge, create forgeries, decipher writing and subsist (three of which are general actions; which is to say, skill actions more than one skill might deploy). You can uniquely create forgeries with this skill.

Things you can't do with Society as a skill without a skill feat: behave as a noble (Courtly Graces), build or use connections (Connections), gather information or recall knowledge (Streetwise), and a bunch of language stuff that does make more sense (and also demonstrates that the old Linguistics skill was rolled up into Society). Note that learning new languages are Society skill feats, though; there's no "Learn a Language" skill action that tells you this, though.

As a GM, you need to consider whether or not the skill check you are about to have your PC make on the Society skill might conflict with those things that you need skill feats for. A character trained in Society still can't mimic noble conduct (I think this makes sense, but it means if you play a noble you need this feat), and you can't use it to build connections with a skill check. You can't gather information or recall knowledge since you need Streetwise as a skill feat. What does that mean in the context of a skill check?

In one sense, this is all fine....it's a nice way of parsing out skill abilities and defining what they can and cannot do. But in doing so, it becomes an interesting game of tracking two sets of data: the skills you are trained in, and the skill feats that let you do different things with them.

I am personally of the view that having a skill called "streetwise" or "Etiquette" would be easier then having to track skill feats....but that's just me. Heck, even just making these specializations of the Society skill that a "skill feat" slot lets you pick would at least organizationally help out as I see it. The PF2E devs did not go in this direction, though.

I'm ultimately fine with this; it's not a Big Deal after all, and in the end at least you can define a character by his focus through the skill feats this way. But....it feels a little clunky if you don't get extremely familiar with the system. Luckily for both myself and the game I am sufficiently interested in it that I feel the desire to do so. I'm enjoying the overall extra level of depth that Pathfinder brings back to the games, something I have been missing with D&D 5E for quite a while now.

I'm trying to talk my players into running a few weeks with a level 12 mini campaign in Pathfinder 2E. I'd like to see how the higher levels play without waiting for the ongoing campaigns to get there. I'll keep you all apprised if this happens.


*Speaking of things where the developers came up with a neat new thing and then buried it in the details, read up on the uncommon items rules. They are buried over multiple pages. Then, consider that spells have uncommon varieties, and other things may be so restricted. Then read on the classes to discern how that applies to class advancement. Then read through the GM's section to see if you can find clarification on how you, as GM, should adjudicate uncommon spells and features. It's a great idea, but apparently no one thought that it deserved an entire special chapter addressing to the GM what this means and how to handle it, insetad leaving lots of little clues to you and the players to try and figure it out. GAAAAAAAHHHH!!!!

Posted by Doctor Futurity at 11:49 AM