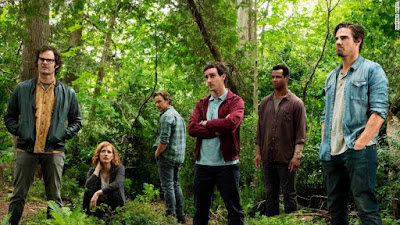 The best part of watching It: Chapter Two wasn't the movie itself (which was fun and a fairly decent if overly long sequel to the first movie) it was these two guys leaving the theater, both maybe around 27-30 years of age if I had to guess, complaining that the cast of older actors in the movie all looked in their twenties. I could not help but exclaim, "But every adult actor in this movie is actually in their early forties..." and they looked at me like I had deliberately listening in on their conversation just to rain on their RLM-themed* gripe parade. Priceless.

Aside from that.....a fun movie! Not the most eloquent of horror films, but a far sight better than the original film, and in general on the "good" side of the evil ancient cosmic murder clown film spectrum. My son continues to be obsessed with It as a film series and a concept. He's vowed to read the novel, just as soon as he's at that reading level (he has also made me keep a copy of Pet Cemetery  on the shelf for when that time arrives.) Until then it's all Goosebumps and eventually Scary Stories to Tell in The Dark (which was apparently a thing when I was a kid and I do not recall ever reading, unfortunately).

Since this post is turning in to a mini review I suppose I'll mention that while the movie was in general quite entertaining it really could have benefited from being 20+ minutes shorter. There are a few scenes (several being gratuitous CGI scare moments) which simply served no purpose, even the --MILD SPOILER-- homage to The Thing moment (you'll know it when you see it) which as best I can tell was primarily there to give one character his "moment of overwhelming fear" sequence despite the same character rather effectively demonstrating an ability to conquer that fair just a bit earlier. Removing some gratuitous moments like this would have tightened the film and made the actually interesting scary bits more significant.

I've never read the novel, but I am now tempted to. It is interesting to note that there are definitely some common "beats" which Stephen King utilizes repeatedly in his novels, and as I have gotten in to King recently (I have spent decades considering King too popular for my tastes...yeah, yeah, old hipster in action here I guess) it has become impossible not to notice that there are some very common recurrent themes in his books (and films by proxy). It is also impossible not to be intrigued by King's weird universe and its interesting recurrent themes, locations, entities and generally eerie cosmology. He does seem to have a problem with tight endings, I have noticed....and so has the movie, which makes this notion something of a recurring joke.

Anyway....fun film, not the deepest or most profound but arguably better than a lot of other horror being produced these days (certain key exceptions do stand out), worth watching especially if you have an 8 year old Stephen King-obsessed fan in your house. Solid A-, would have been rated higher if it had tightened up the story to something closer to 2 hours.


*I love Red Letter Media but often Jay and Mike (and the rest) are profoundly skewed and biased in their perception of some films. I do think they represent the tip of the "critic culture" iceberg that permeates society today though.

Posted by Doctor Futurity at 8:39 PM

Email ThisBlogThis!Share to TwitterShare to FacebookShare to Pinterest
Labels: it chapter two