Cypher System Revised Is Out!!! - Best Game Ever 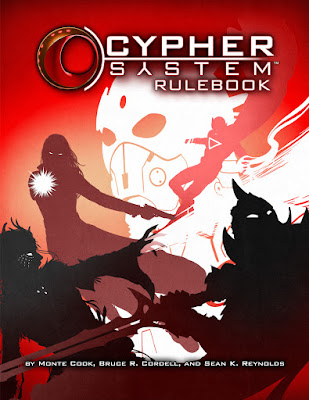 Yesterday I got my notice that Cypher System Revised was being released and my Kickstarter claim was ready, so I now have the PDF and am waiting for my physical shipment. A few comments for those interested in what this new edition brings to the game:

It's the same game system. Much like with Numenera, the revised edition is more complimentary to what has come before. Nothing about Cypher Revised will negate your current collection. I intend to keep my 1st edition book for the game table as it will still be fully functional for players who need to roll characters or rules reference. Monte Cook Games needs to be commended for this practice, it is very much appreciated.

I'm still parsing through it all (though I spent most of last night reading this monstrous tome), but so far I have noticed that some content previously reserved for expansions is incorporated into this new tome: post-apocalypse and fairy tale genres are now in the mix, existing genres such as horror get an extra boost on ideas and rules, as well as additional creatures and options. The rules on cyphers are discussed in a bit more depth and some of the "how to implement" ideas are expanded upon in interesting ways. Additional GM content on how to run games is quite welcome. Some of the new rules options which were introduced in the revised Numenera core books are now also available here. The art is a mix of classic and new. Slidikin are in the Cypher bestiary (yay! I have them as recurring major foes in one campaign). Lots of good tweaks and changes.

This rewrite, much like the Numenera rewrite, has given MCG a chance to revise how some rules are explained, aiding in clarification on those moments when it maybe not 100% clear what the rules intent is. Anyone who has played Cypher for a while knows what I am talking about; the adjudication process is very simple so it rarely causes issues, but lots of specific exceptions occasionally give one pause for thought on deciding how best to handle a given situation mechanically; the revised rules so far seem to be cleaning up these odd spots.

So...if you are like me and love Cypher System, this purchase is a no-brainer. If you have been on the fence, I suggest you start with this book. If you own the old book and wonder if you need to upgrade.....well I am a bit biased but I feel it is worth the purchase; that said, if you're only occasionally playing Cypher System, have limited funds, or just want to know if a table using this book will let you use the old book instead, I think you'll still be just fine.

A+++! I love Cypher System, it is the first game system I have ever encountered that feels like it was specifically designed for my GM play style, and I cannot get enough of it.

Posted by Doctor Futurity at 10:15 AM