This is totally a thing I did not know about until today, and now I think I must plan to eventually go to one of these. The World Nomad Games include a multitude of different kinds of horse races, strategy games (nomad style) and is essentially a smorgasbord of Mongolian and other sports that you have likely never heard of. The most amazing one so far is called Kok Boru, which is as follows:

Kok Boru, which translates to English as gray wolf, has its origins in the distant past, from a time when men went to go hunt for prey to feed their families and cattle remained under the supervision of elders, women and youth. Wolves often attacked livestock and caused many problems. After returning from the hunt, angry men would go to chase after the wolf pack. Having caught up with the pack, they would pick up running wolves from the ground, throwing them between each other almost playfully. The game today requires teams to throw a dead sheep or goat into their opponent’s well on the playing field.

The main goal of the game in the past was training for fighting. While playing kok-boru, men and horses were taught to be fearless. The game trained men to be courageous, brave, and daring, qualities needed by warriors."

This is giving me all sorts of ideas for future scenarios! 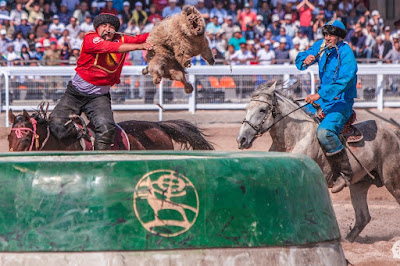