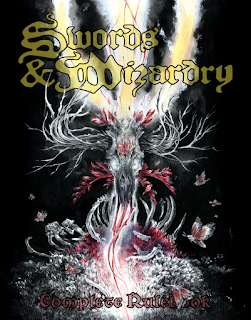 I already feel that Frog God's Swords & Wizardy Complete is my overall favorite OSR ruleset. It's the one which most closely feels like and reminds me of the AD&D days when I actually ran, covers both descending and ascending ACs to suit to taste, have the one-save mechanic, and provides the AD&D class with race and multiclassing architecture that I was most familiar with. It's also a very complete package in one volume, with all the magic, monsters and rules in one book.

When Frog God released a revamped 3rd edition with the cover I think of as the "dragon lotus" image I decided to not worry about it, since I already had two copies of the Otus edition cover. However, recently I saw that the Frogs were having a Labor Day sale so I snagged a copy for half price, and now that I've had time to absorb it I have to say, it is probably the coolest looking book for an OSR title released by the Frogs and most others. If you like good aesthetics with your OSR titles, there are really only a few places to go that provide top notch art and design*....and S&W Complete 3rd is now one of those books you will want for both content and art.

I've been getting an itch to dig back in to OSR lately. If I do, it will be a tightly focused S&WC campaign, with an intent on experiencing classic old school gaming; I'm getting a little burned out on modern D&D I think, and would like a little more "bite" in my fantasy gaming, albeit without having to go to a more complex system like Mythras. S&W Complete is very good for this sort of game, when you want to play D&D but you want the PCs to be mindful of their mortality, at-will spells don't exist, and healing is a rare commodity to be doled out carefully.

*e.g. Troll Lord's full color Castles & Crusades books are very striking. Anything that Zak Smith produces is artistically high quality, stuff like that.
Posted by Doctor Futurity at 10:14 AM