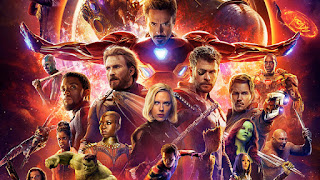 So it's hard to fully review this movie without spoilers, but I'll start off with the spoiler free summary: Avengers Infinity War is definitely worth seeing, and is part one of the two-part big payoff of the Marvel Cinematic Universe. The part one part is really important, as this movie ends on a cliffhanger that guarantees people will be back this time next year to see how things resolve.

The movie manages to simultaneously pay out for the hardcore fans of the movies, as many, many moving parts all slide together into the grand, unifying plot we've been waiting for. That said, if you've not been paying too much attention, or catching every film, this one is still going to work for you; it's stand alone story element holds its own, and even if you have no idea where the infinity stones have been showing up in prior movies (or why) this movie doesn't require that a priori knowledge.

Oddly, one of the most interesting characters in the movie was Thanos himself. Marvel finally has a villain no one can complain about, and this works well; the narrative on Thanos and why he is doing what he does makes him a more compelling and ultimately interesting villain.

Beyond that? Spoilers, lots of spoilers. Actually, I'll try not to spoil things, but I will make the following oblique observations:

1. There's more than one interesting cameo in here, and in particular (you'll know who when you see the scene) that was kind of a "Wow holy cow look who just showed up" moment.

2. This movie HAD to come out right as my kid, in his mid sixes, is developing a strong sense of the concept of mortality.* I saw it on a special preview, but the whole family goes tomorrow and I need to brace my wife for the fact that before this movie is over he's very likely to be streaming tears and snot at certain deaths in this film. It's gonna be rough.

3. The movie politely subverts expected deaths, even as it surprises us with more than a couple unexpected deaths. Then there's....well, a damned good cliff hanger, we'll just say that.

4. Thor had a surprisingly good heroic arc, a sort of fall and redemption, then return to power. Which was good, because like the first five minutes of the movie completely negate any victory garnered at the end of Thor: Ragnarok.

5. No Hawkeye? I thought Hawkeye was going to be at least cameoing.

6. Implied and direct nods to the notion that Scarlet Witch is actually one of Earth's most powerful beings.

FRIDAY REPORT: The family viewing was today. Kiddo handled it better than I expected, although I gave him a pep talk about how this was a sad movie, with some sad things, and then he told me as long as Spider Man didn't die he'd be fine....anyway long story short the ending was perhaps just a bit metaphysical in a sense so it left him sad but not in a streaming snot kinda way (whew) despite ...ahh.....all that stuff that went down at the end (um, trying not to be spoilery). But the overall impact on the total crowd, which had a LOT of kids in it was almost palpable...tears, cries of shock, etc. etc. only the old jaded comic fans were "unmoved." The youn 'uns who haven't gotten used to how these sorts of stories work were genuinely shocked/traumatized/surprised/horrified, etc.


*I found this out the hard way. I bought the animated film "Batman: Escape from Arkham" which I did not realize was quite as adult and violent as it was, but the problem came when my kid immediately bonded with the Black Spider character, who later dies an ignominious death in the movie. My son was devastated, crying, and a couple days later told me I am never to mention that Black Spider died, ever. Period. So.....when you see a movie like Infinity War, as an old comics veteran how do I impart to my son the wisdom that no comic death is ever really permanent? Hmmmm.

Posted by Doctor Futurity at 2:28 AM