Genesys Core RPG: Bringing something new and exciting to the table

Saturday we had a smaller group than usual so we decided to try out Genesys Core RPG. The Realms of Terrinoth sourcebook had just arrived in print, providing a substantial boost to the fantasy-related content of the system, and also helping a great deal in demonstrating how the system can work for the fantasy genre.

The core rules are actually pretty decent at this, but leave the impression that you have your work cut out for you if you want to develop more archetypes, species, professions, gear and special talents/abilities for specific settings. That said, I had a a pretty good idea on how I could run a futuristic Cyberpunk setting using pretty much just the rules content in the core for the Modern and SF genres. However, hen it came down to experimenting and learning the rules with a "learn as we play" game session, fantasy is hard to beat.

After a little over an hour of character generation and plot-assembling I worked out a scenario with some encounters that I cribbed from various sources (including copious pregenerated material on the Fantasy Flight Forums where Genesys has a lot of productive fans). I also borrowed some content from the only introductory module out so far (albeit wedded to a new plot).

The result was pretty interesting as well as fun. My three players drafted up a catfolk primalist, a burrow gnome rogue and a rough orc warrior who all worked in the city state of Keranos in a setting I drafted up specially for Genesys, inspired by what I had read of Terrinoth (and whether the region of Keranos fits somewhere in the Genesys default setting or will become its own thing I have yet to decide.....*)

Some role play events mixed with one distinct battle, in which local thugs hired by a rival of the PC's patron to steal the maguffin they were tasked with protecting and delivering. A group of five thugs and one boss thug proved to be a fun fight, albeit less of a threat than I expected. Playing the combat in Genesys Core was an eye opener....the dynamic of a single dice roll that determines level of success/failure as well as levels of threat/advantage and triumph/despair provided a fascinating scenario in which narrative intrusion into what was going on not only was encouraged, it was practically necessary. It was like a game system which not only asked me to do what I tend to do as a GM already when I run games (describe things in a manner that makes it illustrative and fun) but gave me a mechanical reason to do so, and to reward players for assisting in this narrative, too.

The same thing applied with social encounters, or really any skill encounter. For example, a Lore check on the gnome to see what she knew about her people (she's a gentrified gnome) could result in a couple successes (so she knows a thing or two about her heritage), but imagine a success with a threat or two....that could mean she knows something, maybe something that she shouldn't, or her information is not the kind she wants to divulge. A failure with lots of advantage could mean she doesn't know much about her people, but she bluffs her way through it so people think she does.

There are a lot of interesting way to interpret the dice, though in most cases where it is useful (such as in combat) to gain an immediate mechanical/situational benefit the rules have charts on how to proceed in case the GM is at a loss.

The net result of all of this was a moment in play where the gnome, cornered by a foe (the thug leader) such that she couldn't maneuver to disengage, made an attack in desperation and failed to connect but got five advantages (which look like chevrons, or arrows)....that was enough by the rules to suggest she did, in fact, manage to slip between the thug's legs even as he dodged her attack, and then let her sprint down the alley to medium range with a blue advantage (boost) die for her next action against him.

I don't know of many games that let you get all of that out of one die roll, which was initially just a missed attack.

Anyway: I'm really enamoured with the way Genesys Core RPG plays now. We're going to tackle it again this Saturday, and I'll report more as the play experience evolved. I haven't felt this excited for a game system in a while: a system which is decidedly new and unexpected to me, one for which I can't say I have a strong grasp on, but which is challenging in a fascinating and fun way, that I really want to learn through and through in play. Genesys Core has me very, very intrigued. 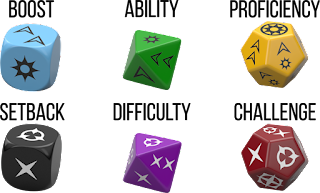 *As a habitual setting creator who can only run homebrew with any reliability, my money's strongly on "devise my own setting, even if I borrow cool bits from Terrinoth," such as the rune stone mechanic which is quite cool and distinct, as well as the heroic abilities.
Posted by Doctor Futurity at 2:35 PM