After bitching about what a weird train-wreck the entire Dark Nights: Metal series was, I realize I haven't talked about good comics in ages. And there are a lot of them! Here's one you should check out: 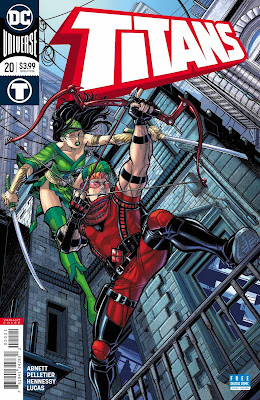 Although there's a rumor that Titans will be cancelled after issue 24, I think it's at best because the series will get a restart soon following the current plot line in which the Titans have effectively been forced to go on hiatus as a team while the Justice League figures out what to do about Donna Troy. It's possible they plan to capitalize on the imminent new TV series of the same name and more or less the same team that I've heard is in the works.

Fans of the old days of the Teen Titans (and you know what I mean....the Marv Wolfman era of greatness) will find the current run on Titans very familiar territory; the story telling is top notch, and Dan Abnett (who has always been good at this sort of tale) shows off his skill as a writer with a series of stories lightning-rod focused on the characters and their internal conflicts, both for better and worse.

The current Titans run is up to issue 22 right now and has put the team through the wringer on multiple occasions, culminating in a story arc recently in which Donna Troy is revealed to have a potentially dark future when her distant future self, Troya, returns in time to set her past self "straight" on how to handle the gruesome events to come, chiefly by becoming a sociopath. The team holds up against this but then the Justice League intervenes, and the "younger" and former sidekicks are all essentially forced to disband while the older, more experienced Leaguers try to figure out what to do.

Queue a focus on Roy Harper (Arsenal), the rough and tumble one-time sidekick to Green Arrow, who continues on his usual path, this time investigating the spread of a strange new drug, the source of which is hard to pinpoint. As tends to happen when Arsenal goes off on his own and starts fighting the drug trade, Cheshire shows up again to continue her never-ending con on her baby daddy Roy.

Menawhile, behind the scenes the cutest couple in DC's continuum, Mallah the Ape and the Brain, are the creators of the new drug, which it turns out has a mind-expanding, mind-sharing psionic property, allowing the Brain to aggregate all the minds of the users to expand his own consciousness, giving him effectively singularity-level intelligence.

It's really nice to see interesting plots with a tight focus on the specific characters and their many foibles, relationships, doubts, fears and hubris. Dan Abnett knows how to write this stuff and do it well. The art team of Pelletier, Hennessy and Lucas is "classic," which to me at least means this looks like a DC comic and does not skew toward the more juvenile or cartoony designs of some other titles (Teen Titans, Batgirl), which I appreciate. 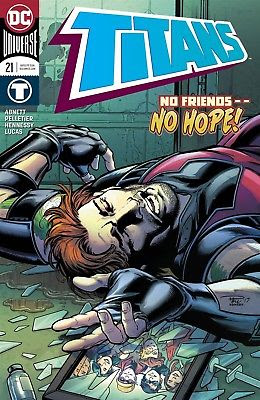 There's absolutely nothing wrong with an exaggerated, cartoony style like that, but tonally it changes how you react to the story, and thankfully the more traditional style in Titans works best for the somewhat more hard hitting, emotionally resonant tale of the twenty-something Titans the book focuses on.

Anyway, check it out...either in current form, or start picking it up in graphic novel format. The revival of the Titans began with a tale returning the long absent Wally West to the fold, and it's never let up since, so you won't be disappointed if you have (like me) been craving something that felt more like a continuation of the old Marv Wolfman style than the prior New 52 runs on Titans were. 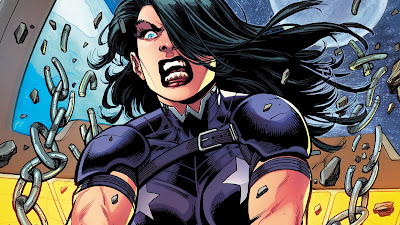