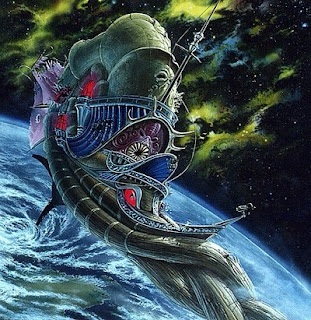 According to these two posts at ENWorld about the GAMA Trade Show presentation from WotC, it was strongly implied that the upcoming Mordenkainen's Tome of Foes will have Spelljammer favorites like the hippo-like pistol-packing giff, and that this is because the next world that will be revisited in D&D 5E is Spelljammer. I'm a bit floored.....I'd sort of assumed that Spelljammer would remain forever an artifact of curiosity from the 2E era, too interesting and weird for more conservative WotC to explore in this day and age. Maybe Starfinder's success motivated them to bring it back....but that doesn't seem right, given that Starfinder is much closer to 3rd edition's Dragonstar in theme than it does the strange alternate reality Ptolemaic/Copernican space fantasy of Spelljammer.

Either way....I'm stoked that this could happen, and would even suggest that Greyhawk fans (all 700 of you) should take heart....if they'll rekindle Spelljammer, then maybe even Greyhawk has a chance!
Posted by Doctor Futurity at 9:35 AM