Return to the Crypt of the Everflame Pathfinder 2.0 Playtest Summary

Jason Bulhman, author of the very module playtested as well as lead Pathfinder designer provided an interesting blow-by-blow summary of a recent playtest he ran using an adapted version of the Crypt of the Everflame module (click here for the playtest report). That was one of the few published modules I ran for pathfinder 1.0 as well (it was the first in the line for the new PF system back then), and it's a halfway decent dungeon slog and introduction to classic Pathfinder. As such, this playtest report helps in framing some of the information revealed.

1. Perception is now treated as a proficiency/class/level thing that works like a skill but isn't.

2. Shield defense is a reaction and apparently fighters can go through a lot of shields using it.

3. Apparently somatic and verbal are discreet actions you must spend toward completing a spell?

4. flanking now grants flat-footedness which is also a -2 penalty to the enemy rather than a +2 bonus to the attacker. This one doesn't surprise me as it's consistent with the underlying redesign of many features in Starfinder, where the net effect is the same, but the wording/approach is essentially simplified or tightened up.

This summary was from a listen to the Glass Cannon Podcast which I concede I have not actually listened to because I don't have enough time or energy in my life to listen to podcasts, so I appreciate Jason's efforts to summarize this. 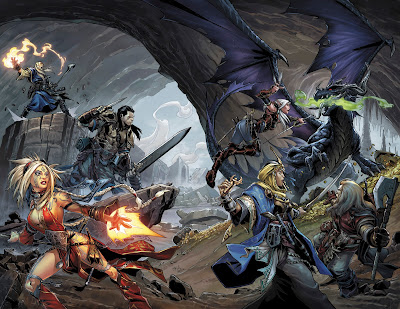 As these little bits and details roll along I concede, it sounds really interesting. I'd love it if the game managed to retain the "D&D feel" while also making combat more nuanced and lending weight to things the game has traditionally taken for granted (still thinking about what it means to spend an action on a verbal and somatic casting...)
Posted by Doctor Futurity at 6:00 AM