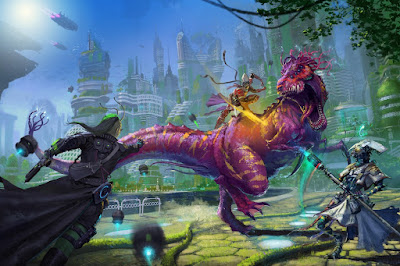 Starfinder's second hard cover expansion is out: Pact Worlds focuses on the fourteen planets of the Pact Worlds system along with a mess of useful NPC data, player character information and other bits you'll find very handy for your Starfinder games.

It's no secret I love Starfinder (though I had to love it for what it is....literal Pathfinder in Space, with more than a dollop of Space Fantasy in place of hard SF) and this book really meshes well with the core rules and Alien Archive. I'm really interested in seeing what the gear book looks like now!

My assessment so far is that this is an essential must-buy for any Starfinder fan. Even if you aren't specifically using the Pact Worlds for your game, there's just so much interesting information here to loot for your own purposes that it's a hard book to pass up. I'm really pleased with what Paizo has done with Starfinder, and where they are taking it. I would still like to see a "Starfinder Gamemaster's Guide" eventually that includes content on world design and such, ala more conventional "Travellerish" RPGs, but Pact Worlds does a fantastic job setting the theme and tone of the core campaign and its conceits for the system.
Posted by Doctor Futurity at 4:55 PM