GURPS Dungeon Fantasy is in the Wild

My Kickstarter set of GURPS Dungeon Fantasy, including the Companion and GM Screen, arrived today. It's a monstrous set: the box is HUGE in traditional over-the-top Steve Jackson Games form, with four core books, a module book, dozens of figurine stand-ups, the stands, dice, and two large maps.

It's so much that I doubt I'll have time to absorb it for the next few days....but it is most definitely the GURPS experience, just pared down to the relevant Dungeon Fantasy bits. Off hand the book seems to cover most of what the DF line has presented in the past, but one can clearly gain additional benefit from many of the other DF modules out there (I noticed for example that there are only a few racial options in the boxed set).

I hope this sells well, and it encourages SJ Games to produce more DF books in print. I'll talk more about it soon once I've had a chance to properly read through the beast... 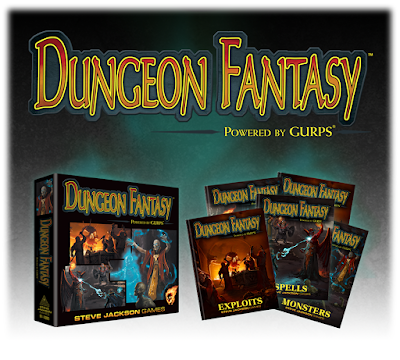 Posted by Doctor Futurity at 12:35 AM