Diving in to Mass Effect: Andromeda (Out of Touch Dad Game Review)

When this game released it was to an instant firehouse of disdain and mockery, with never-ending videos of goofy animations and awkward glitches filling up the news of Mass Effect: Andromeda. Some of my cohorts reported also being less than satisfied with it. I tried the PC version briefly (before the wave of patches that released) and was met with a combination of some glitchy behavior and characters who didn't sync well with their environment, as well as the harsh reality that the lead female character (Ryder the sister) looked....well....weird.

Cut to the near present, snagging a cheap sale copy of ME:A on Xbox One I decided to check it out with all the patches in place as well as Bioware's confirmation that there is no future DLC planned that I need to wait for (I'm still annoyed that the Citadel DLC came out for Mass Effect 3 well after I finished the campaign; it was very anti-climactic to try and go back and finish that DLC.)

So the good news as I see it: the patches seem to have fixed all the animation issues I had noticed on PC, or at least Xbox One certainly doesn't have them. The graphics are sharper than I could get on my PC edition (I have a pretty nice rig but ultimately some games are just designed to run and play more smoothly on console) and the HDR effect on the Xbox One S is a nice touch. The character models are not bothering me this time, although I didn't even both to go for Ryder's default animation and made her a distinctly more asian gal with features that are less off-putting.

The first time I tried the game I felt like the rush to get people down to an alien world (Habitat 7) and in to a firefight was a bit too contrived and worked against the intended grain of the tale (colonists from an entire other Galaxy, showing up to their new home fully armed and ready to rumble). Now giving it more time and many more hours in I have to say...this feels like a pretty decent game to me, with all of the "Mass Effect bells & whistles" I like. But given how much everyone crapped on this game (and on ME3 previously, which I also liked), I guess perhaps the IP was doomed in the eyes of the teeming masses before it ever had a chance. EA releasing it with obvious animation and character issues was icing on the cake.

In the end, it just really amuses me that Destiny 2 is suddenly the darling of the hours, ME:A remains one of the more excessively reviled games for "reasons" and so the internet trundles on. Not that there's anything wrong with Destiny 2.....I have always been a Destiny fan, too; but Destiny 2 is really not any different than its predecessor....other than the fact that it had immensely better marketing and apparently knew how to target the fickle gaming audience just right. Go figure.....either way I win, though.

Well, except for the fact that EA/Bioware may have cancelled future ME plans indefinitely. Sigh. Maybe next time they can get Nathan Fillon to voice act a snarky, charming rogue robot and then rake in the dough. Fillon = profit! 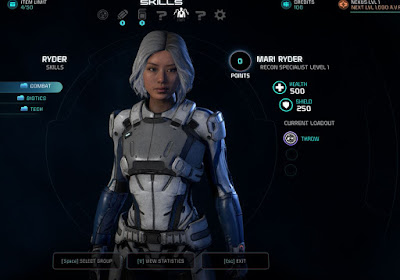 Posted by Doctor Futurity at 10:16 PM