D&D 5E: Wolven in the Age of Strife

Work on my 5E edition of Keepers of Lingusia is coming along (slowly) but here's a recent entry: 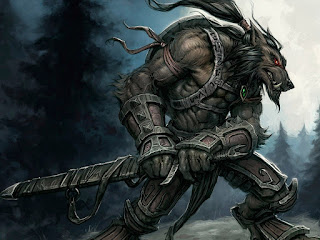 The Vyrkasha Wolven (beastmen)
CR 1/2 (50 XP)
LN medium humanoid (wolven)
Initiative +2
DEFENSE
AC 15 (studded leather, shield)
HP 9 (2D8)
OFFENSE
Speed 30 feet (40 feet when running on all fours).
Multiattack wolven may make one bit and one scimitar attack per round
Melee Attack bite +3 attack (one target, reach 5’), 1D4+1 piercing damage
Melee Attack scimitar +3 attack (one target, reach 5’), 1D6+1 slashing damage
Ranged Attack long bow +4 attack (one target, ranged), 1D8+2 piercing damage
Statistics
STR 12 (+1), DEX 14 (+2), CON 11 (+0), INT 11 (0), WIS 12 (+1), CHA 10 (0)
Languages: common, wolven
Senses: scent, darkvision
Skills: Intimidation +3, Perception +3, Survival +3
TRAITS
Scent: Wolven are gifted with exceptional noses and this grants them advantage on any roll to track or detect a target in which scent could play a role. The target could be up to a week old and the wolven would still gain this tracking benefit; if the target is more than a week old, or recent rains have eliminated evidence of the scent then the advantage may disappear (at GM’s discretion).

Quadruped: While running on all fours the wolven gains a Speed of 40 feet. Wolven can shift to all fours as part of a move action, and can also stand back up in the same move action for a 5 foot cost.

Wolven gain the following traits if run as player characters:

Scent: see details above; grants advantage on any perception or survival skill related to smell and tracking.

Bite: wolven can bite as an attack, dealing 1D4+STR modifier damage. This is considered an unarmed attack.

Run on All Fours: the wolven are ideally suited to running on all fours, and build leather armor with slings to let them carry weapons easily and without hindrance while running. To many men, this has made wolven look like they transform into wolves, but in fact the wolven are simply adept at moving this way. While running on all fours the wolven gains a Speed of 40 feet. Wolven can shift to all fours as part of a move action, and can also stand back up in the same move action for a 5 foot cost.

Dark Vision: Wolven have dark vision and can see exceptionally well in starlight.

Attribute Bonuses: Wolven gain a +1 to Dexterity and Wisdom.

Vyrkasha wolven are indigenous northern beastmen who dwell in the region known as the Northern Wilderness. In the Era of Strife the wolven are engaged in a fierce territorial battle with gnolls who seek to gain control of the vast peninsular region. The wolven are strong but hampered by being divided over seven tribes. Still, the tribes often work together against the demon-worshipping gnolls.

Wolven structure their tribes around a chieftain, and usually among every 10-15 chieftains a warlord will arise who serves to coordinate and protect the tribes and families in his domain of control. There are currently seven “kingdoms” in the northern Wilderness.

Vyrkasha priests of Wolfon tend to be cleric/rangers while those who serve the Emerald Queen are usually druids. Most adventuring wolven are known to be barbarians and rangers. A few wolven bards exist, calling themselves skalds as the Austrengardian bards do.

The name Vyrkasha is the title wolven ascribe to their own kind, and means "the people" in their own tongue. Wolven is the title applied by the men of the north and south.