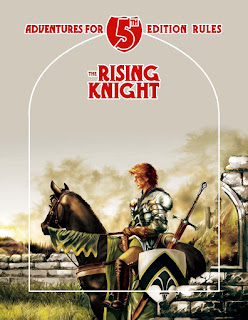 I had to pick it up....despite owning the original.....and wanted to make  a couple comments on the conversion for those interested:

First, it's using the C&C stat block format, which is a sort of chatty "so and so has the following things" kind of format. I think this works well for the extremely simple C&C NPC statblock style, but I think it fails for D&D 5E. Even a simple as D&D 5E is, it's still got more information in a stat block that's better suited to a user-friendly format that doesn't require the GM to stop and think a bit about what he's looking at. Hopefully this will change for future adaptations.

The conversions do look pretty decent, though, and I get the idea of what they are aiming for....evoking the same feel and style of C&C's modules in 5E. Most of the stat blocks in the module are perfectly easy to use; it's just the more complex NPCs that suffer a bit (such as Gritznak) and would benefit from a cleaner presentation.

In the back is a section on converting C&C monsters to 5E, which reads a bit like an effort to convince everyone to buy more C&C modules, but I suggest holding out for Jason's conversions, as they'll make it easier than it already is. The module is also published under the OGL, so they're going that route.....it's been really interesting buying all these 3PP 5E products, since they are currently all over the place on this, with some being OGL, others being non-OGl but very careful, a few flagrantly violating WotC IP and at least one I know of which publishes modules without even copyrighting them. C&C conversions being OGL will make life easier for those 3PP playing the game safe, though.

Posted by Doctor Futurity at 9:21 PM

Email ThisBlogThis!Share to TwitterShare to FacebookShare to Pinterest
Labels: castles & crusades, dungeons & dragons 5E, Jason Vey hits it out of the park again