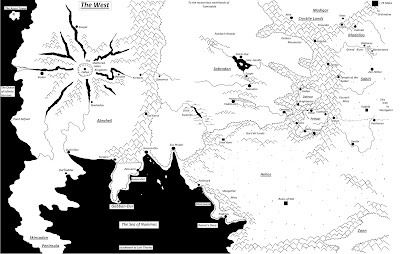 I did a little number crunching last night, and while I have no doubt skewed this a bit I found it interesting to determine that my most used campaign world is Realms of Chirak, by a wide margin, over the last 20 or so years (a number picked because prior to 2001 there were only 2 campaign worlds and one game system: AD&D). Realms of Chirak has been the center of at least 21 significant campaigns since 2001, most of which were medium or long in length (meaning lasting 5-10 or up to 15+ levels in development, respectively, which is typically 6 months to a year of play or more). One campaign, now retired, made it all the way to level 27 in D&D 3.5 back in the day, and ran across multiple editions over a period of 14 years.

#2 is Lingusia, which as my original and most venerable campaigns has seen the most transformation and revivals, in that I have three timelines/epochs of play, and it rests squarely at about 11 campaigns in the last 20 years. At least one of those campaigns (Warlords of Lingusia) retroactively became non-canon after a change in the timeline instigated by the players.

#3 is Enzada, with 7 campaigns since roughly 2010. Unlike Chirak, which started in 1992 as a Runequest campaign that then migrated to AD&D 2E where it took off on a wild roller coaster ride, and unlike Lingusia which started in 1981 as my default AD&D world, Enzada was custom built to be the core setting for my Pathfinder 1E campaigns when that edition first came out. I rapidly expanded Pathfinder to the other worlds, too, but Enzada was exclusive to PF until D&D 5E arrived. I migrated it over to that system for a couple campaigns, but it just didn't feel right; Enzada's core theme is "nonwestern fantasy in all forms" and Pathfinder supported that much better than D&D 5E did.

The two new campaigns, of course, are The Ironvast/Selentar campaign (using 3.5 edition) and Oman'Hakat (for Pathfinder 2E). I am quite in to exploring these two worlds, though I have not done much to post anything on the blog (yet). The Ironvast/Selentar setting is a fantasy version of a world with a lot of mirror analogies to Earth in the fifth century AD. Oman'Hakat is an archaic fantasy world with a weird history and mythology that ties closely to Lingusia, and it's built squarely on a fantasy reinterpretation of the archaic area from the Late Bronze Age on down to the rise of Rome. Both worlds are fantasy analogs for these time periods so they are better considered derivative; I much prefer to run "fantasy, but themed with historical derivations" that you can spot if you squint closely, rather than "history, but tinged with fantasy." If I want to run an actual campaign in the archaic Late Bronze Age, I will run an actual campaign set in that timeline with as much historical authenticity as possible, using something like GURPS. But for both of these campaigns the idea is to create disguised fictional analogs of these timelines, then let the fantasy elements take hold and go wild.

To some degree it may be hard for my players to keep track of all the campaigns I run. I even have some which were short runs and may never return (Pergerron, Irkalla, and Isomular are a few), or ones which I have not yet found a good way to represent by system (Sarvaelen, which never quite gets a proper trial run outside of a one shot here and there). This all probably matters more to me as GM than my players, because I will most benefit from the world which lets me springboard the best scenario and campaign ideas off of it, but my long time players do get quite invested in these worlds, especially The Big Three.

These days, with the proliferation of options, I have thought a bit about which campaigns are best suited to which game systems. With my experiment this year running a Chirak campaign using Cypher System with the Godforsaken sourcebook, I've found that it does allow for some interesting focus on flavor and details that could (in theory) get muddied with more conventional D&Disms. Likewise, I designed the current Selentar/Ironvast campaign specifically with D&D 3.5 in mind.....the idea is that literally anything that is part of conventional D&D lore should have a place somewhere within that game's cosmos; not all such D&Disms, by contrast, have made it in to Realms of Chirak. And my Keepers of Lingusia campaign will eternally suffer an identify crisis, being a world built on AD&D 1E blocks, a universe where dwarves rarely cast much magic, paladins are supposed to be human, and weird racial options are exceedingly uncommon. Yet....I only ran a couple campaigns in this world using 13th Age but you know what? It was kind of a really good fit. I only wish the Icon System of 13th Age was less exhausting (and gimmicky) to me as a GM.

There's another thing I noticed while crunching the numbers on the last twenty years of campaigning. I found plenty of abandoned campaigns, which all fell into the following categories:

--Campaigns I wrote up but never actually ran

--Campaigns I started, but then immediately lost steam on (too soon from last campaign, the concept didn't seem to click after the first few sessions, I was experiencing GM fatigue, player attendance sucked, etc.)

--The campaign started and persisted, but player/GM issues led to its demise (I've had at least one campaign I'd like to restart one day which led to a group meltdown, mainly due to two players who did not really get along tanking it for the rest of us; I think enough time has passed now that I could rekindle that campaign once more)

--The campaign started but was aborted when something newer and shinier came along, or I realized I needed a break from that particular genre, but not until after firing up the campaign. Usually these quickly turned into short scenarios and wrapped quickly instead of withering on the vine.

By my count there are around 18 of these over the last 20 years, though likely there are more I simply don't remember due to their being so...well....unmemorable. Not all ideas are worth pursuing!

Still, when I trawl through the thousands of pages and hundreds of files of notes I have on hand, I see some interesting gems pop out and I wonder to myself why I don't just go back and re-explore some of these aborted concepts.

There was a great campaign I started that would explore the lands of the Xoxtocharit in Chirak, a land loosely inspired by a pulp version of Mayans, long serving as sideline villains in prior campaigns. The campaign itself was designed to focus on the actual region of the Xoxtocharit, and to explore what life was like in an extremely hard environment, dominated by priest-kings of demonic gods that treated life as cheap and expendable for their purposes. It would have been an interesting campaign, I think, but an unexpected (and rare) TPK left us interested in a new pursuit. All the material is there, though, just waiting for a better start to explore from a future group.

Another campaign, wrecked by inter-player issues (it ended up tanking an entire group and left me more than a little irritated with the two players in question) involved a complex plotline in Enzada exploring the mysteries of the so-called Star Gods and a stellar convergence of heavily Lovecraftian horror. It was sufficiently good that I still think about where it could have and should have gone, had not the players in question created so many issues that I shut it down and tried (briefly) to run something far more vanilla and plebian, before realizing the problem was irreconcilable and I simply stopped gaming with those two players. It's been a few years, I think I'd really like to take a shot at a reboot on that one now, maybe this time powered by Pathfinder 2E.

Anyway....just some thoughts for the week. Of the many systems used over the years, I do find it interesting that right now I find D&D 3.5 and Pathfinder 2E the most captivating (for different reasons), and I am surprised to notice that I have sufficiently fond memories of 13th Age that I may be tempted to revisit that system again someday.

Posted by Doctor Futurity at 11:57 AM