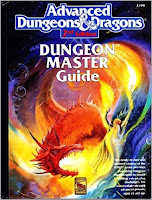 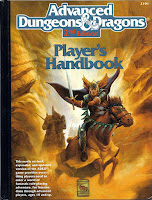 I have discovered, at last, where I think my nostalgia sweet spot lies: 1989. Probably, more specifically, 1988 to around 1992, but definitely in that zone. Top on my list of recent nostalgia finds is a vintage, almost mint condition copy of the 1989 original (not revised) version of the Advanced Dungeons & Dragons 2nd Edition Dungeon Master Guide. The AD&D 2nd edition core books from 1989 are  notorious for having been fairly flimsy,* and it is not difficult to find one with tattered corners, an eroded spine or any other number of blemishes and issues, but it is extremely hard to find one that looks like it just came off the shelf at the game store, and the DMG that just showed up in the mail looks exactly like that....not even any page yellowing! Insane.

I'm also waiting on a Player's Handbook, also from 1989, which from the images looks to be fairly intact (some corner issues but they look minor). I have a later bound Monstrous Compendium on the way, but I'm not even trying to find one of the 1989 binders filled with three-ring-punched monster sheets. It was a well-intentioned by terrible idea then, and finding those old loose-leaf folios for the original MC is hard. I still have some from back in the day (Spelljammer), but so few have survived to the present.

All this is happening because after realizing that my recent enjoyment at once again playing (and rekindling) my D&D 3.5 collection didn't so much spark nostalgia as it demonstrated that the 3rd edition rules hold up exceedingly well even in today's era of games that are inspired to heavily simplify from their predecessor. If you want crunchier mechanics and a sense of meaty stakes in your game, 3rd edition in its various forms delivers quite nicely.

In realizing that the nostalgia bug didn't lie there, I realized that it did, for me at least, lie with AD&D 2nd edition, but also very specifically those books which came out in 1989. That particular style of tome, with the mixture of classic late 80's fantasy art, woodblock-style images, and an aesthetic that was both evolved for its time and already curiously quaint just a few years later makes these books stand out to me. It was the edition my 1989 gaming group pleaded with me to purchase and run after they had graciously put up with a year of SPI's Dragon Quest and Avalon Hill's version of Runequest.** I still remember my first AD&D 2E campaign in great detail and the general enthusiasm of both myself and the group has been hard to replicate ever since.

When in the mid-nineties they released revised versions of the books, followed by the Player's Options series (an effort to reconcile dozens of other splatbooks published for AD&D by TSR), the style of art changed to something which, while interesting, just didn't evoke "D&D' for me in a manner consistent with how I felt the original 2E tomes did. It felt off, but hard to say precisely how since the look is nice....but I had grown accustomed to the older style of presentation.

Anyway, it turns out that yeah, I totally enjoy seeing intact, decent copies of tomes from this era again and reminiscing about the great adventures I had. It's part of the missing nostalgia equation, chiefly because my earliest gaming memories with D&D B/X and AD&D 1E are a mixture of interest punctuated with various compounding issues: the fact that for most of the 80's my opportunities to game were sometimes far and few between, the fact that I moved rapidly from AD&D (which was at times monolithically obscure in its design for a kid of age 10-13 when I was running my approximation of it) and started exploring dozens of other games on the market at the time, and the fact that a great deal of my time investment in gaming in the early and mid-eighties was spent writing fanzine content, going to conventions and playing games like Tunnels & Trolls, Dragon Quest, Palladium Fantasy, Runequest and Call of Cthulhu. AD&D 1E was replaced at various times by its many other contemporaries, and when you look at my classic campaign setting (Keepers of Lingusia) carefully, you can see the grains of other games and where they made their mark: Blackwell (a city on the map in RQ2) was once in the deep north on my game map, where broo-like beastmen roam free; vyrkasha wolven populate the Northern Wilderness thanks to Palladium, the great city of the plains, Karan, was my cypher for Khazan, etc. etc.

So for me, my campaign world that started in AD&D 1E in 1981ish didn't fully bloom and return to the fold until 1989 when I finally caved in and decided maybe AD&D 2E made the game something I would like to revisit. And it sure did....with some caveats (which included me immediately writing up new stat blocks for all the missing demons). That first campaign during the fall/winter semester set the pace for all my gaming going forward through about 1995, in which I structured each AD&D campaign around the length of the semester, since I never knew if I would have the same players in time for the campaign the semester following. In this manner I got quite used to a story structure that would last around 10-15 game sessions, with pauses during mid-terms and finals. It was a good approach.

Because of the turbulent and weird years of my youth, I also have what I would describe as "more unpleasant memories than good ones" from 1980 to 1988 or thereabouts. AD&D 2E arrived in my life at a time when that trend reversed, dramatically, for a time. From the year I went to college and on I had more control over my own destiny, and while there were plenty of bumps to be had in the road of time, it is indubitable that I had both more control and more freedom to compensate for it. Amidst all of this I had a handful of games, AD&D 2E in the lead, which were my key go-to forms of entertainment. I ran AD&D 2E every week, pretty much, for all of the 90's. And in those earlier days during my college years I also leaned hard on games such as Cyberpunk 2020, MegaTravller, Dark Conspiracy, DC Heroes, GURPS and Call of Cthulhu.

It's harder to find serious nostalgia for Call of Cthulhu, GURPS and Traveller, since I never stopped playing those games. But for AD&D 2E, I very much took a hard stop on it when D&D 3rd edition came out, which was a serious revision to the game, enough so to argue that it was an entirely new and different game system. AD&D as a result isn't just an archaic set of mechanics, it's a specific thing that I did for a specific period of time and then just....stopped.

Anyway, no idea if I will try running it again (though the notion is being tossed around and the group seems receptive), but I sure am enjoying re-collecting those original books from 1989.

* I still have my original DMG, for example, which is held together by duct tape.

** Which means yes, I am shopping around for the old Dragon Quest and Avalon Hill Runequest books on this nostalgia kicks (and Palladium Fantasy 1E), but I'm not quite willing to pay out the premium prices copies of these books in good condition command.

Posted by Doctor Futurity at 11:28 AM