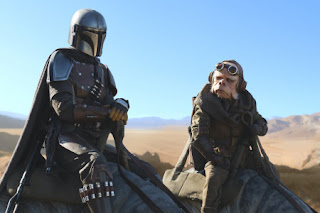 Two episodes of The Mandalorian have been released since Disney+ premiered a few days ago. Tonight I decided to bite the bullet and do the free trial, if only so I can see the show for myself rather than hear everyone else talk about it.

First: some Spoilers ahead! I suggest you go watch at  least the first two episodes yourself. If you are not sure it's for you, here's my suggested criteria for taking the time to do so; any one of these will do:

2. You always thought Boba Fett specifically was a loser but the concept of the Mandalorians deserved more development;

3. Or you played a lot of Star Wars RPGs in the past and always wondered what those would look like on the big screen.

Really though, just enjoying SF on TV is a sufficient criteria. Also, SF with a nice budget.


...Anyway, minor spoilers ahead! A few, I will try not to do much (some reviews I have read don't even do the courtesy of not explaining they are about to broadcast the entire plot, including a huge reveal that I feel is much better experienced in viewing than my telling you what it is).

Right off the bat, my gut impression after the first two episodes is, "It's Lone Wolf and Cub, but with Star Wars trappings." I also liked that it leaned hard into a strong "space western" thematic; you will get shades of classic spaghetti westerns out of this series as well as throwbacks to classic ronin-themed samurai films. I won't explain why, but you will see.

The two shows break with some Star Wars conventions. No classic music; no screen crawl at the start. Fine with me. It does not always break with "Star Wars-isms" though, and some of them are a bit annoying. An example: the Mandalorian approaches a door for a secretive bounty, and is greeted by a robotic eyestalk, just like in Return of the Jedi. This scene is here because of that callback; it doesn't mesh well with the "lore I remember" which raises questions about why a creature I vaguely recall as being some sort of cyborg monk in Jabba's palace would also be on this other unrelated planet. But....the fact that the old Expanded Universe is no longer canon also means perhaps that the robot eyestalk deal is really just a "door answering service" in the outer rim, maybe?

These Star Wars-isms are more annoying in the first episode, but they start to diverge quickly enough as the plot and setting start to take better hold. The events in the series are post-Empire, so take place some time after the Return of the Jedi. The locations all appear to be in a very lawless Outer Rim, and The Mandalorian dives in short order into some serious world building that thoroughly takes advantage of the "show, don't tell" approach. This pays off exceedingly well.

Throughout watching episodes one and two I quickly got in to it for being it's own thing; sure, it's Star Wars, and I sort of feel like I'm watching Star Wars because it keeps throwing things at me on screen that are reminding me its Star Wars....but it's also very much its own style of film, exploring a new niche in the Galaxy Far, Far, Away that we have sort of wanted to see on film for a long time now, but really only seen in books. Arguably it does a better job of this than Rogue One or Solo, both of which tested the waters but maybe were also too timid to really try and expand the idea of what a Star Wars tale could be.

Well, I didn't want to pay for another service....but I'm hooked. If this is indicative of the average quality of what Disney has lined up, I guess it will make for a fun ride.
Posted by Doctor Futurity at 1:14 AM