I have caught three movies in under three weeks and frankly all three have some merits (and issues) worth talking about. Except for The Lighthouse which I caught with a friend, my son was also present and had his own awesome takes. Here goes! 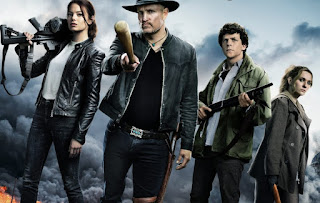 Son's Take: about halfway through the movie, and then afterward: "This is not the movie I expected it to be, I am very disappointed in it." Later: "Papa, I saw the trailer for this movie and it looked just like Zombie Tag, which was an amazing idea, but the movie wasn't anything like it. This movie was scary a bit but it was also boring and not funny at all."

Dad's Take: I enjoyed this film, as a sort of direct "ten years later but also like no time at all has passed sequel to the original" type thing. It was more comedy in the same vein as the first, but also felt entirely needless and despite being an hour and 38 minutes long I kept checking my watch in hopes it would end soon. It somehow managed to be both entertaining and boring all at the same time. The first movie was a road trip comedy disguised as a zombie survival film. The second movie is exactly what you get when you make a sequel to something that stood well on its own to begin with and needed no sequel, as if the entire film was cobbled together from additional content filmed during the first and left on the cutting room floor. Funny but entirely unessential. C+

I showed the trailer to this film to my wife and son and both were like "That looks neat, we want to see that," but thankfully I went with my friend who also appreciated a good, weird film and as a result I did not have to explain topics such as hallucinatory masturbatory mermaid sex to my son; that  conversation is mercifully pushed off. This allowed me to enjoy a unique film that I hardly ever expect to see in theaters anymore; a film which dances between surrealism and horror while demonstrating that both genres walk the fine line between the terrifying and the absurd....and The Lighthouse does this masterfully.

This is my first experience with Egger's film style, and now that I've seen The Lighthouse I must see The Witch next, and hopefully will also enjoy it as much as this movie. The Lighthouse itself is an amazing treatment, an historical descent into madness which left me elated to see Defoe as an actor let loose while Pattison (our future Batman) demonstrate he's got the chops for some serious acting. Filmed in a 3:4 format designed to induce claustrophobia while reveling in a stark black and white film style, The Lighthouse is a trip that everyone serious about surrealism and horror should take. A+ if you're in to this kind of thing. 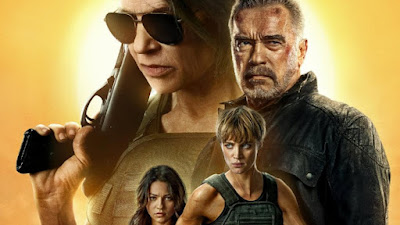 Son's Take: After seeing this last night my son went on to a fascinating diatribe about how Terminator: Dark Fate not only surprised him with how good it was, and wasn't just good becasue it "started off with action right away," which he very much appreciated, but he then went on at length to tell me the film inspired him deeply, and he now not only wanted to be an augmented superhuman himself, but that he wanted to affect change in the world in a deep and profound way that he wasn't entirely clear on at his almost-eight-years-old perspective on the world, but he was working on it. He proceeded to tell me he wanted to be just like "That guy who made change happen for real," and then proceeded to accurately quote Martin Luther King Jr. to which I was like "You mean Marti...?" and he was then, "Yes! Martin Luther King Jr.!" and I was pretty much, okay, this is extremely interesting.

Dad's Take: This left me with piecing together what was in Terminator: Dark Fate that so inspired my son to somehow equate the movie with what I suspect are recently learned lessons in school about civil rights activist King Jr. and I suspect it was (itsy bitsy spoiler) Dani's speech moment in the film....you'll know the one when you see it. Also, the cool augmented superhuman, and the persistent message throughout the film that the future does not have to be written in stone, even when it seems to be; but the mere fact that Terminators are being sent back to change the future fundamentally means the humans of the past who know about them can, in fact, change the future.

Okay, all that aside, the moment in the film I thought was most controversial was the completely normal way in which the border situation was portrayed in the film followed by the Rev 9 Terminator cutting its way through dozens of border patrol and military personnel in about thirty seconds. It was controversial, I felt, because the movie did a great job of humanizing Mexico and then turned the border to the US into its own distinct and ominous obstacle as a side issue within the main story itself, done so matter of factly and without commentary yet inevitably forcing many in the audience to consider what it means to live in a country that has managed to do "that thing which inherently does not feel right" to itself, all in the name of border protection. If it failed at all here, it was that the holding facilities as depicted were a bit too clean and not as oppressive as what we actually have in reality.

In the end, this was a perfect soft reboot of the Terminator franchise. It negated three of the six movies in the franchise mere minutes into the story, and proceeded to set up four protagonists who each contributed in meaningful ways to the story, plot and dialogue in memorable moments that only initially riffed off of what had come before, then proceeded to tread new and fresh ground...a welcome change of pace from other films which fall into the pitfall of aping without understanding prior entries in the series.

Schwarzenegger himself was my favorite part of the movie, FYI. I will speak nothing of how his role plays out (best to see spoiler free), merely that I felt he had all the best lines and his story was singularly unique in its approach to how he got to continue to play in the Terminator sandbox, and it worked exceedingly well.