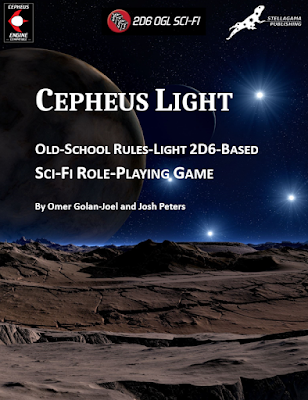 If you're not familiar with the Cepheus Engine, it's the spiritual OGL-powered successor to Mongoose's 1st edition of Traveller. When they migrated to Traveller 2E, Mongoose managed to put out a very nice looking, useful product....but they left the OGL behind. For third party publishers this really only left them with one choice: keep publishing under the 1st edition Traveller OGL.

Eventually a fully functioning variant of the OGL for Traveller was released from Stellagama in the form of Cepheus Engine, a product essentially compatible with all of the 2D6 versions of Traveller,  designed to provide a Traveller-style ruleset to people who for whatever reason might not be interested in the Mongoose version or the immense 5th edition that exists somewhere in Kickstarter Land. For me, it's a nice ruleset although I do personally prefer Traveller 2nd Edition from Mongoose, which is a very complete engine with lots of changes I like.

Cepheus Light accomplishes very much the same thing MGT 2E and Cepheus Engine does, but in a tighter package that manages to evoke the feel of Original Classic Traveller while actually incorporating key elements from modern design that make it a robust package that straddles a fine line between old school and new, as well as being sufficiently versatile to cover multiple interpretations of Traveller style gaming.

If you're familiar with how ridiculously easy Classic Traveller is, then you'll have a sense of how Cepheus Light works, albeit from the MGT 1E OGL framework. Unlike CT, Cepheus Light aims for a more comprehensive ruleset recognizing the years of additional supplements as well as making it more sufficiently generic so that the players and referee can tailor the game to their own SF universe. There are 12 career choices, for example, as well as rules for augments so you can reflect cybernetics/bioengineering in your setting (a problem with CT, which was published before Cyberpunk left its permanent mark on SF).

Cepheus Light includes streamlined versions of rules for various features, most notably starship design and combat, which includes 19 pages of design rules and a bunch of clean stats for pre designed ships, as well as 10 pages on starship combat, half of which is an example of play. The only failing of this chapter is the fact that it includes no ship maps, a tradition in the Traveller universe of games....but a quick scan through Drivethrurpg.com will reveal hundreds of those you can deploy in a Cepheus Light game if that's your thing.

Unlike Classic Traveller, Cepheus Light is focused on the rules of MGT 1st edition from the OGL so things such as combat work with the more contemporary version of those rules; this may be a welcome style for people who remember the rather clunky modifier tables and armor mechanics of CT. All in all, though, the rules for Cepheus are incredibly straight forward; any Traveller fan will recognize them, and any new gamer will find this edition of the game easy enough to follow along with. It is actually easier to understand (imo) than both the 1st edition MGT rulebook and the Cepheus Engine full rules.

If I have to provide a negative to this: it's that the rulebook itself, while illustrated, is otherwise using fairly generic stock art that is not that exciting or evocative. There is also a tiny section on alien races, but it only provides three examples (greys, reptiloids and insectoids), then refers you to another Stellgama product for more detailed design rules; there are also no rules on creatures. Not including even a page on some design rules hurts the product's universal applicability just a bit.

That said....you get a rule system that far exceeds most packages and at only 108 pages this is still probably the best bang for your buck in SF gaming right now; I'd say it's a better choice even than Classic Traveller which can also be found in POD on DriveThruRPG.com. Check it out! I plan to run an SF game soon using only these rules. I find the versatility in such a small package to be a very welcoming experience.
Posted by Doctor Futurity at 3:13 PM