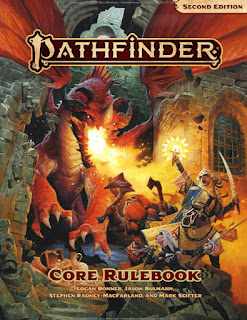 I picked up my books this morning but didn't get to dive in until after work. I also snagged a second set of books at a convenient sale price with discount through Barnes & Noble.

Well, the core rules are 638 pages long. Thankfully knowing how to read a RPG means knowing where to skim and where to dive deep....and I've spent the evening designing characters and exploring the action/combat mechanics. A few observations so far:

Most characters look and feel a lot like 1st edition PCs, but there are twists along the way. Ancestries make the racial component of characters more significant. Because of how ancestries work there are no optional character races in the Bestiary, unfortunately....they need several pages to flesh out the core traits plus ancestry feats. I predict a big, fat Advanced Race Guide 2nd Edition in the near future.

I've made a few characters so far...you can design a level 1 character more quickly (once you do it a couple times) than in PF1.

Multiclassing is using the feat mechanics touched upon in the playtest. They work, and they make multiclassing as a concept a more focused and easy to do thing.

Literally everything in the game is now dominated by the proficiency mechanic. It's not entirely unlike D&D 5E's proficiency system, but with the Pathfinder twist: you have a ranking of 0/2/4/6/8 based on being untrained, trained, expert, master or legendary. This mechanic impacts your weapon skills, armor skills, plain old skills, saving throws and even class mastery. It is the most unifying mechanic I have seen tackled in a 3rd edition variant; it makes Pathfinder 2.0's design distinct and I am very intrigued to see how this mechanic affects play over time.

The equipment section is comprehensive and well organized.

The proliferation of feats in the game is heavily cataloged and codified by when and what sort of feat you can take. The entire book is, at its core, extremely tight in how it organizes the data and this makes PF 2.0 feel much more accessible than its predecessor. Attention to "finding that thing you need" was clearly a priority.

The concept of the Class DC is cool and intuitive. It's basically the DC set by your class and key trait that applies to relevant class abilities. Smart design.

The action point economy and its symbol system is the first thing you are introduced to. It is easy to understand and follow their intent. I am plowing through the mechanics/actions/combat content right now and this feels, again, like taking and codifying prior edition rules into a coherent and consistent whole. This appears to be PF2.0's major theme: organize, categorize, and make it easy to follow.

A downside: so far it is clearly framed as "Adventures in the Age of Lost Omens" which is the next chapter in Golarion I guess. There's a chapter on the setting in the book. My issue is not with this element, but the utter lack of interest in providing discussion or direction to GMs who want to do their own thing....maybe they will reserve this content for the Gamemastery Guide 2nd edition coming out in January, but it's hard to say.....I think they are aiming for stronger brand awareness of their IP, but at the expense of the many gamers who prefer to do their own thing. Not a big issue; 99% of this book is usable just as PF 1.0 was for whatever you want, but even just a nod to the kind of gamer who doesn't follow the published setting material would have been nice. Starfinder has this same problem.

So far this has proven to be a familiar game with a face lift....and that's a good thing. It looks like I should be able to prep for a game on Saturday to test it out, see how PF2 feels now that its out in the wild. I'll have a "first game" analysis up after Saturday!


Posted by Doctor Futurity at 8:38 PM