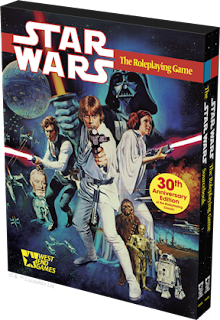 This is, for many (myself included) what we tend to think of when we think of RPGs and Star Wars. No funny dice, just six siders all over the place. The original rules which founded for many the love of the West End Game D6 System which was such an effective rule system for space opera gaming.

This edition is much more accessible and easy to use (in my not so humble opinion) than the current iteration of the game, and surprisingly in its relative simplicity compared to RPGs of the modern era manages to be rather flexy....I can see using this ruleset to run Rebellion Era games with no need to spend too much effort revising the content of these books.....indeed, the majority of the contents of the 1st Edition Star Wars RPG laid the groundwork for not only the Expanded Universe to come, but most of what survived the Disney era culling, too.

In terms of the replication, the books are very precise, including the color plates and black and white mix, and the quality appears to be spot on. I don't know how they did it (contrast with what WotC had to go through to recreate AD&D 1st edition) but it has worked. The only complaint I have is the spines seem a bit weak to me. Also, it says 30th anniversary on the cover slip (missed the mark slightly), but the back covers show "40" for the 40th anniversary of the original film. Make up your minds!

I'm not expecting FFG to support this game beyond this special edition print, but I am really hoping that fan support will swell once more on ways to either convert FFG content or simply stat out new stuff seen in the new movies (which for this edition means roughly 7 feature films, two "canon" cartoon series, a cartoon movie and probably some stuff I'm missing)....and all that ought to be easy to adapt to this edition, because when you look at the total content out for the original Star Wars RPG on it's date of release (check out the Sourcebook's bibliography) we're talking the original 3 movies, 3 novelizations, and 6 tie-in books from the Han Solo and Lando Calrissian series (Splinter of the Mind's Eye and the Marvel comics of the era were handily overlooked.)

Anyway.....if I do any Star Wars gaming today, it's going to be with this ruleset.
Posted by Doctor Futurity at 6:14 PM