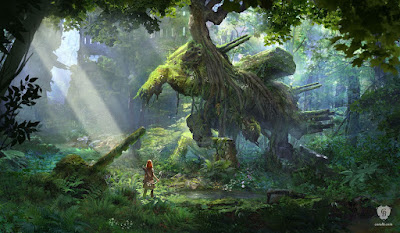 Recently I've been playing Horizon: Zero Dawn, a PlayStation 4 exclusive that is honestly good enough that if you need a reason to buy a PS4 I would suggest this is it. H:ZD is a story about Aloy, an outcast girl who grows up in a remote woodland along a mountain in the presence of a people called the Nora, who are subsistence scavengers and hunters that survive along the mountainside in a very hostile landscape dominated by animal-like machines that are at best dangerous and at worst actively determined to kill humans. The Nora have developed a wide range of bizarre taboos and traditions designed to keep their people out of trouble, especially when it comes to the ruins of old civilization that dot the landscape, and the nature of the machines.

The setting is pure post-apocalypse and possibly the best take I have yet experienced (Fallout 4 feels trite by comparison, with it's retro-styled take on the after-the-bomb scenario). Horizon: Zero Dawn by contrast is set very far in the future, and the relics of man are not just rusted hulks, but fragmentary debris that blends seamlessly with the natural environment.....you can be exploring and come across a whole city which you will not at first realize is what it is until you begin to notice the rusty skeletal structure hidden beneath the jungle canopy.

If games like The Last of Us and The Division deal with a very recent apocalypse, and Fallout 4 deals with a gonzo sci-fi retro apocalypse, then Horizon: Zero Dawn explores a potential and very eerie "distant survivors of an ancient apocalypse," and it does so very well. It's not clear to me just how far in the future H:ZD is set (it feels like anywhere from a realistic 2-3 centuries to maybe thousands of years....there are subterranean complexes with stalactites that had to have taken a very long time to form, for example*), but it's far enough in the future that almost none of the contemporary tribesmen regard the memory of old man as anything other than religion and myth.

What grabbed me about the game that led to thinking about Mythras is just how "grounded in reality" it is. This concept...that the game is grounded in reality, and runs with that as a baseline, might sound like a no-brainer but trust me, video games regularly have your avatar dealing in crazy levels of power and ability with boundless fatigue. H:ZD does the opposite, with a character who is essentially just a good tracker and hunter, can use a bow, and is a reasonable but not spectacular melee fighter. Aloy is a realistic protagonist, in other words....and her skill set is enhanced only by a relic of ancient technology that lets her see the remnants of the ARG grid that was once the principle communications technology of lost mankind.

Given that the game's character is dependent entirely on realistic skills, I realized that Mythras would be an exceptional fit for this sort of game, one in which your abilities as a nomadic hunter or sedentary woodsman might be the most relevant defining component of your character, and the only special currency for "magic" was the information gleaned from relic tech that let you tap in to a long-lost ARG grid, or an occasional bit of working tech that lets you affect the behavior of the mysterious machines.

Mythras, in fact, would be a fantastic game for this sort of extremely low-tech post-apocalypse. I'm working out some ideas right now, and I'd prefer not to rip off H:ZD whole cloth so the idea would be to work out a good altenative post-apocalyptic reality, but the idea of what amounts to a "realistic future SF P-A game" powered by Mythras has me extremely intrigued right now. 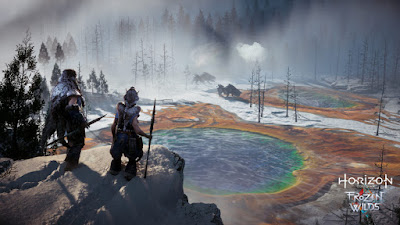 *If the wiki is to be trusted, then at a .12 inch rate/year of formation one can assume many of the stalactites seen in the underground ruins on H:ZD that are on average 4 or more feet long may have taken between 400 and 600 years to form. That's from the date when the complex was "compromised" and began leaking, mind you....or worse yet, from the date that the complex was eventually covered in dirt and began to develop cave-like limestone deposits. Some of the cave formations, assuming they weren't there before the apcalyptic event, are large enough that they may have taken tens of thousands of years to grow as large as they did. So.....yeah. Long time.

OTOH some of the ruins, as ancient and crumbling as they appear to be, may not be as old as the caves suggest.....depending on your source, some studies on the likely rate of decay of a civilization like ours may happen in only centuries, if even that. So there's probably a little artistic license taken here in the game, but considerably less than is seen in, say, Fallout 4 where the setting is allegedly 2 centuries after the apocalypse yet looks and feels like the war happened only 20 years ago.
Posted by Doctor Futurity at 6:00 AM