Gaming in the Death Bat Zone These Days 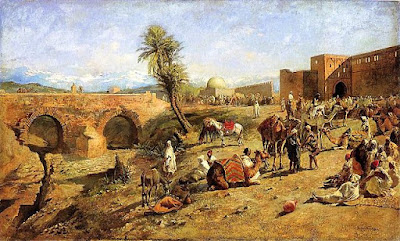 Things have been busy with life and work, which has meant neglect for the blog. Luckily, it's always possible to just chat a bit about what's been going on, talk about the ongoing campaigns....

On Wednesday I continue to rotate two campaigns (each one gets a week in the spotlight). Every other Wednesday sees a continuing tale of a gang of adventurers with too many paladins (and paladin-likes) roaming the desert lands of Galvonar in Lingusia. On the other week we have the ongoing tales of a gang of sailors and adventurers for hire who have now been marauding their way through the Western Nakamura Isles, with each session slowly bringing them closer to visiting mainland Mataclan.

The Galvonar game is level 5, creeping very slowly to level 6. The Western Isles game started at level 1 and everyone just hit level 3. Both games are aimed at more visceral "low key" adventuring, with no obvious "epic plots" looming....this is pure sandbox-style adventure, survival and exploration. The Galvonar game has also been working to defy expectations and norms....the first major "lost temple" they had to explore was actually a forgotten bastion of a good deity, for example. When the players are so used to temples being for ancient evil gods that they rationalize how the "good deity" must have gone evil or rogue then you know I, as GM, both made the right choice and need to break out of my traditional mold a little bit.

Saturdays have been a serious contrast. Saturday mights have been my "historical, or something like that" evening for gaming, with two rotating games using Call of Cthulhu and Mythras, respectively. The Call of Cthulhu game is about ten sessions in and focuses on the weird happenings of coastal Oregon near the towns of Coos Bay and Astoria. It's got a bit of a Twin Peaks vibe (a subject on which I have not yet written but really should, given Twin Peaks: The Return was the best damned television I've seen in decades) but this is Twin Peaks with the characteristic mythos twist. The campaign is really about seven different mythos tales all interlaced and sometimes connected together. The adventurers have been exploring these many weird tales at their own pace and often jumping back and forth between one situation and the next according to where their investigations take them....the net result has been a fascinating proof that you can indeed run Call of Cthulhu quasi-sandbox style. The game takes place in the modern era, and I'm borrowing more than a little bit from Delta Green as well.

The off-night game for Saturday has been Ancient Mesopotamia, powered by Mythras. I plan to put more up on the blog about this setting soon, but the idea is it is a "historically precise" time period set at the dawn of the Sumerian kingdoms, some time during the formative years of the Ubaid dynasty (the first kings of Sumeria), around 2,900-3,300 BC. It's sufficiently early in the era that much of what is known from later periods does not yet apply, or is simplified (or has been mythologized)...smaller number of deities, for example, and the fact that the first direct evidence of mass siege warfare dates to around 3,500 BC. Small donkey-like asses (onagers) are the only real "horse" in the region (mostly Elam), and they are considered prestige animals for nobles to use to haul their chariots.....you don't see the Eurasian horsemen until you get out past Elam, and even then it's still a style in infancy. The professional soldier isn't a thing, yet....every able-bodied male may need to take up arms for the city but needs a viable trade to sustain his or herself outside of the protection of the city....except in Spring when everyone goes to war against the neighbors you hate.

It's been a great deal of fun running a literal swords & sandals epic at the dawn of civilization and the early bronze age. There's magic, and a hint the supernatural is real....but it's tricky, too! Players have noticed that I've been describing magical effects as potentially "influential" but not necessarily real....and the only "magic" people see is in the eyes of the one looking for it. The result is the hint that magic is real and subtle....but potentially also just a matter of belief and not necessarily really there, either.

Anyway.....eventually I'll have content to post related to these campaigns, but not until my players exhaust one or more of the settings. In all four cases it looks like that could be a long ways off, possibly months before any one of these campaigns reaches a conclusion, especially considering all four campaigns are modeled on a sandbox-style approach. This is both cool and rough at the same time, as I have a great interest in running a Cold And Dark Campaign, or trying out Hyperlanes 5E, never mind the fact the new Conan RPG is now out and my copy awaits my chance to grab it at the game store this week! As always....too much gaming goodness, not enough time.
Posted by Doctor Futurity at 8:41 AM