FrontierSpace is Live and in Print! 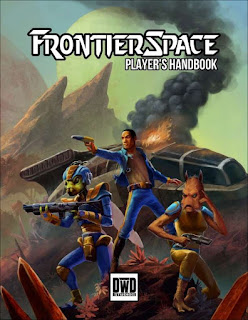 If you have heard of DwD Studios then you know their amazing lineup of low-cost, easy-entry games which include the OSR White Box inspired White Lies, the D00Lite powered Barebones Fantasy RPG and Covert Ops Espionage RPG. Now we have a new addition to the fine roster of games: FrontierSpace, the sci fi RPG. I've been reading through the PDF and really like what the game offers. To give you a brief run down:

5 major races (covering five core types including humans, robots and three suitably exotic but familiar races)
12 skills (in the "d00Lite" system skills are comparable to professions or classes you simultaneously level up in....think of it like a sort of professional "bundle" of skills that each one represents)
Lots of neat stuff in character design (homeworld, quirks, background details, charts to roll on)
A very large equioment section with plenty of cybernetic implants
Lots of vehicles and starships and rules for both
A short overview of the default setting
A bunch of pregenerated character examples

FrontierSpace's core mechanics is very simple: roll percentiles against or under a target number that's usually an attribute plus skill modifier. So if you have a 50 agility and +20 in warrior might have a chance of success of 70 or less to dodge out of the way of an attack. Modifiers and situational bits apply, but the basic rules in the game cover about 14 pages of actual content.

Like the other DWD Studios games, this one is complete in one modest volume. It's worth noting that unlike some other recent releases this is a complete game in its own right. The world of FrontierSpace is designed for straight science fiction and provides no rules of psionics, weird space magic (the Force cough cough) or anything else....though I imagine you could hack Barebones Fantasy to add some of that to your game if that were your thing.

If you're looking for an easy pickup and play system, with lots of details but a mechanically lite approach that still has plenty of working parts, this is a great choice. Very much recommended!

Posted by Doctor Futurity at 4:36 PM