As some may have noticed, I love Mohrg. These fiendish undead are a sort of hyper-advanced ghoul with a long proboscis/tongue that paralyses targets and makes for a generally fine mid-tier foe. Just ask my regular players! They have many mohrg horror stories.

Anyway, here is the mohrg for OSE, my new favorite D&D variant: 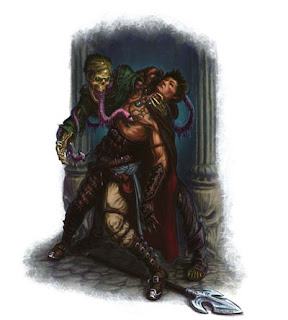 Mohrg are terrifying undead forged from the vile souls of serial killers and murderers. They resemble skeletons with a writhing mass of organs and flesh in their body cavity and skull, from which emerges a hideous tentacle-like purple tongue covered in paralytic slime.

Mohrg are noted for their unrelenting sense of commitment to the evil ways that led them to their fate. When mohrg gather in groups this can quickly lead to a unique and terrifying epidemic of undead in the form of zombies and new mohrg.

Slam if the mohrg strikes with both blows it can restrain the target with a grab long enough to gain +2 on its tongue attack.

Tongue save vs. paralysis or become paralyzed for 1D4 minutes. Target can save each turn to end the effect.

Undead does not make noise until attacking, immune to effects that target the living (such as poison), immune to mind-affecting or mind-reading spells.

Create Spawn creatures killed by a mohrg rise in 1D4 rounds as zombie. When this happens the burst of necrotic energy heals the mohrg for 1 hit point per hit die of the slain creature and the mohrg gains the benefit of the haste spell until the end of its next round. On occasion some mohrg generate new mohrg instead of zombies as an effect of slaying a foe. These mohrg are exceptionally dangerous. When a mohrg slays a target, there is a 10% chance that it returns as a new mohrg instead. At the GM’s option any evil character slain by the mohrg has a 50% chance of returning as a new mohrg.

Posted by Doctor Futurity at 10:24 AM