Modules and Their Many Sizes

Short post today.....trying to remember to post more frequently (I got badly out of habit from the old days on 3 posts a week hell or high water). Yesterday several books arrived which I had been waiting for, and each was a lesson in varied design. In fact, it's rather insane how widely varied the approaches are in each of these books: 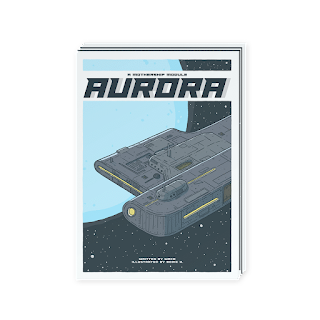 Aurora is the latest in a series of Mothership RPG adventures. It comes in a docket packet you must break to get in to, and the module itself is a handful of cardstock pages with the usual excellent minimalist design characteristic of Mothership adventures, in which you get a framework on which to drape your own interpretation of the horrors within. 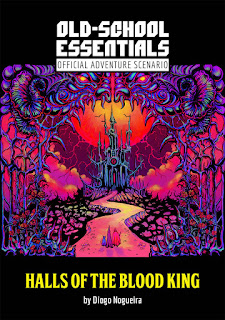 Halls of the Blood King along with five other modules from Necrotic Gnome for Old School Essentials RPG is an example of how an economy of design (not unlike one sees with Mothership) gives you the framework of an adventure without bogging the GM down in details that are best handled by....the GM. Excellent maps, slick retro graphics that are modern but evocative of an older fantasy style without feeling pandering and a "to the point" design approach make this an incredibly approachable (and usable!) module. 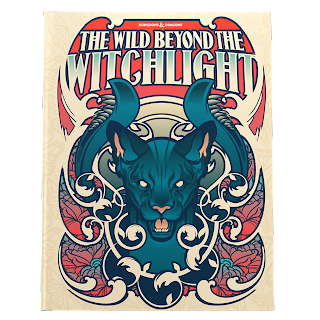 The Wild Beyond the Witchlight is 1 part sourcebook on the Feywild to three parts adventure series, with some updated fey for 5E that I think many will be happy to see. The book is typical of Wizard of the Coast design, a large tome which aims at readability and shows more effort at structuring the overall plot into bite-size chunks, allowing DMs to manage it without too much fuss. 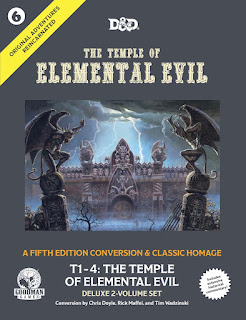 This is actually two monstrous 400+ page tomes, the first one of which is split between a series of articles and interviews on the inception and impact of the oiginal module, followed by a faithful reprint of the original Village of Homlet and the 1st edition compilation of the Temple of Elemental Evil. It then dives into a massive retooling of the modules into 5th edition rules, which start in book 1 and spill in to book 2, ending with a massive bestiary and new items section. It is a gigantic tome, and lives up to this module's daunting reputation. I also think Goodman Games knows its audience leans older, as they use a big, readable font for the 5E section that is easy on older gamer eyes.
As I look at these books I realize that while I really would like to run The Temple of Elemental Evil, it's just...too much, man. It's also very traditional in design, in the sense that it communicates a lot of text-heavy exposition and depth. This is not something I'd notice or care about if not for modules like Aurora and Halls of the Blood King, which are actually more old school in design in the sense that they get to the point and leave much of the exposition to the GM. They are not genuinely old school, however, in the sense that actual old school modules were never this user friendly in design. Meanwhile, The Wild Beyond the Witchlight is interesting but I can tell it's one of those modules I will read and maybe borrow a bit from before moving on. There might be some cool plots there....we'll see, I need to find time to read it.
But The OSE and Mothership modules? Yeah, those simple economies of design and brevity I can actually handle, they fit into my wheelhouse of usefulness.
Posted by Doctor Futurity at 9:43 AM