Cyberpunk 2077 and Cyberpunk Red - Nostalgia for a Dystopian Future 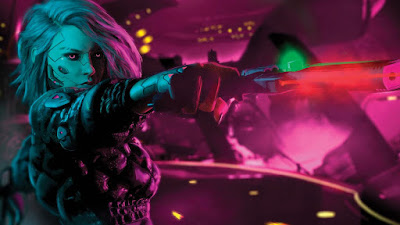 As I was playing Cyberpunk 2077 this weekend while reading the hefty new tabletop RPG edition in spare moments, I realized that this is definitively a product that caters to the specific corners of my own youth that fill a nostalgia niche. Nope, it turns out that my specific disdain for much of the past is not because I don't "get" the nostalgia craze....it's because that craze needs to be specifically curated for each individual.

For me, some of what might constitute nostalgia has never quite "gone away" and as a result it continued to harbor my interest over the decades....I never moved on from the Alien film, for example, and instead continued to enjoy all subsequent movies (both for better and worse) as well as the novels (also for better or worse). D&D has been constant and pervasive, a lifelong hobby I never took a twenty year break from like some of my high school and college friends did. As a result, for me D&D is an arc of progress over many years, and was never frozen in amber.

With Cyberpunk 2020, I had a game I played intensely for about four years in college, and I was deeply obsessed with it (and secondarily with its source inspirations in Gibson, Stephenson, Williams, Rucker, Dick and others). But then something happened around 1995-1996, in which I moved several states away and ultimately dissolved my Cyberpunk collection. As the years closed in on 2020 the game itself remained firmly a dwindling speck in my rearview mirror. As a result, when Cyberpunk 2077 and Cyberpunk Red materialized late this year, a year in which the dystopian part of the Cyberpunk element manifested in full (but without any of the cool Cyber or Punk parts of the equation), it suddenly dawned on me that I had, here, an example of something that neatly fits into a nostalgia angle for me.

Cyberpunk 2077 is particularly compelling. I had picked up a very nice laptop with a GTX 2070 Max Q GPU specifically with the idea in mind that I wanted to run this game. As I was playing Cyberpunk 2077 over the weekend (on ultra settings with the ray tracing turned up to the max) I realized that this game at times felt like a fever dream memory of the adventures we played back in college, a canvas of something trapped in the books and dice and character sheets, and of course our imaginations, now enmeshed in graphics and storytelling that brought them sharply in to light.

Cyberpunk 2077, if anything, feels a bit anachronistic. It's simultaneously almost too close to modern urban nightmare living and also the elements of contemporary culture are painted in broad predictive strokes as to what this will look like in our future. An ominous city in which sunlight lurks high above, while a seething mass of humanity that is barely recognizable as such chases personal enhancement and gratification in a dystopian nightmare bordering somewhere between Corporate Rule and the personal libertarian ideal to shoot back if shot at, mixed with a firm belief in nihilism shot through with the odd moments where you can be in the Kabuki district looking at racks of dirty cyberporn magazine and suddenly a lone child runs by and I am thinking, "Yeah, someone somewhere still needs to be making kids in this horrifying universe....I wonder where those people are?"

I imagine that a generation which has grown up in today's actual internet environment might find some oddities with Cyberpunk's vision of the future, even as it seems to have so many eerie truths to it. Like my son's sometimes amusing and at other times bizarre interpretations of what Star Wars is really about, it is divorced entirely from what started it. If you weren't even alive when the fiction and game that built a subgenre rose to prominence and eventually fell back in to obscurity, what does it feel like to look at this insanely dark vision of the future now, when it seems genuinely closer and more poignant than ever before.

Musings aside, I do have some pragmatic comments on the video game. Most notable is that I think if you're going to play this, try to do it on a machine that can run it at "ultra' graphics with all the Ray Tracing effect maxed out. I ran it both with and without Ray Tracing. Without Ray Tracing it looked good, but maybe not as good as, say, "Horizon: Zero Dawn" or many other titles specifically built to take advantage of the now "last" generation of consoles and PC GPUs. With Ray Tracing on I suddenly got a glimpse of why this feature is seen as a big deal; it leads to some moments in the game where there's an eerie sense of surreal reality to the environment as it almost "just about" lines up with what your brain would interpret as real.....almost, I say, because then an NPC walks through you or some odd thing happens that remind you its a video game.

So my suggestion is: get this game, but get it on the best rig you can afford, and stay away from last gen tech for playing it (especially PS4 and original Xbox One). Also, and I can't stress this enough, get it especially if you have a nostalgic fondness for classic Cyberpunk, I don't think you'll be disappointed.

As for the book Cyberpunk Red....more on that soon. I will say this: while Cyberpunk Red is definitely a sequel to the predecessor editions of the game, and it's a really nice looking book in true CP tradition, the video game seems to be at once an homage and reinvention of the setting as much as anything; Cyberpunk 2077, functioning as it does, but in a "realistic" timeline of 57 years from now. The actual 2077. Cyberpunk Red, meanwhile, builds in the history that has come before and so far looks like it could work well either to continue that existing tradition, model the future in CP 2077, or of course let you build your own dystopian future history to suit to taste.

Posted by Doctor Futurity at 1:10 PM