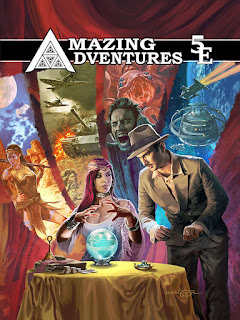 Not too long ago Troll Lord Games produced Amazing Adventures, a SIEGE Engine powered take on pulp adventure. It was basically Castles & Crusades, but the castles were haunted nazi-filled places in the 30's and the crusades involved Indiana Jones and Sam Spade wannabes. It was a neat concept, and well executed, hampered only by the fact that it relied too much on the OGL, meaning many spells and foes in the game felt a bit "been there, done that" and not so much genere appropriate as system appropriate. Despite this, it was a good take on the genre, albeit short on support material until a later Kickstarter expanded the game's scope of material greatly.

After that, apparently there was a push to do a 5E powered edition of Amazing Adventures. One thing that this new edition did, aside from reboot the game into 5E mechanics, was to present it more as a multigenre "modern day" ruleset with goals of providing a baseline set in the 30's and 40's, but with plenty of content for pulpy scifi, historical or other possible takes. The first SF sourcebook for the new AA5E in fact is Solar Burn, which for those who remember how great it was is actually the StarSiege universe repackaged for the new era. So if you grab AA5E plus Solar Burn you have all the rules you need to run some SF games in 5E.

Anyway, this is less of a review and more of a discussion on what I've snagged so far and what I think of it, noting that I have not yet played the system though the temptation is strong; a key limiting factor is that since all my groups are now online with Roll20 or Astral Tabletop, I am pretty much limited to systems that have some level of support in those VTT environments, and Roll20 as of yet does not have AA 5E support in the form of a character sheet. I alas do not have time to figure out how to make one, so if I do run the game it may be using Astral, which is a tiny bit more forgiving in its process for games with limited online resources.

The mechanical elements of Amazing Adventures 5E is pretty straight forward: it's 5E mechanics, but with the thematic elements of pulp-styled adventures. This means you have base classes like gadgeteer (The Rocketeer), gumshoe (Sam Spade), raider (Indiana Jones), mentalist (Svengali or The Shadow), hallowed (covering types from Lankester Marin to Shadow Man), pugilist (Rocky Balboa) on down...you get the idea. A lot of cinematic and pulp themes abound in the class options available. It's a good range.

You might wonder how Solar Burn handles these classically themed classes. The short version is: each class is designed thematically to work for a range of environments, and you simply identify the class by a more appropriate name (gadgeteer becomes technician, gumshoe becomes investigator, raider becomes scholar/explorer, etc.) Solar Burn also omits magical classes entirely, aiming for a pure SF setting.

The rest of the AA5E rulebook is about as you'd expect: it gives you the 5E rules customized for its specific take on modern pulp adventure, with plenty of extra detail mixed in. For example you can find enough content in the core book to run games in the present day or future without getting Solar Burn; the core rules even cover things like computers and hacking, decidedly not typical of the 30's and 40's era pulp adventuring. The Solar Burn expansion provides lots of rules and topical content specifically for SF as a genre and its default setting, but is not entirely necessary to use AA5E for your own purposes...it's just really handy to have.

The AA5E book does include a medley of monsters, which seem to be the whole, more or less, of the older monster book for original AA. These include obvious pulp entries, reskinned OGL transplants and a range of genre-appropriate types including some Lovecraftian takes. It perhaps would benefit from more strangeness specifically from it's genre sources....it hits some obvious ones like mummies, deep ones and zombies but could really benefit from some strangeness like a generic version of Pennywise, the Thing from Another World, The Fly, or the Beast from 20,000 Fathoms. Heck, any of these would be better included than Planetar and Solar Devas which feel extremely D&D and not at all modern/future pulp adventure.

The book includes a ton of genre specific and optional rules, from sanity to detailed firearms information. Adding in fantasy elements from standard D&D is included, and a fairly detailed section on how to run adventures is included. The book tops off with a sample adventure. 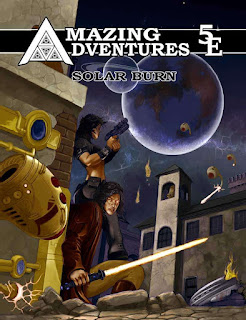 Solar Burn is an add-on book, and covers additional SF genre details in about 50 additional pages, which talk about starships and methods of FTL travel as well as providing alien species for players to choose from and more genre specific rules and equipment. It's a nice complimentary tome to the core rulebook, though I feel like I would have liked anther 50-100 pages of extra material for good measure. This is more just because I like what Solar Burn has to offer, and while it plus the core book really do give you everything you need to play, I'd love a more elaborate look at the universe and its denizens. 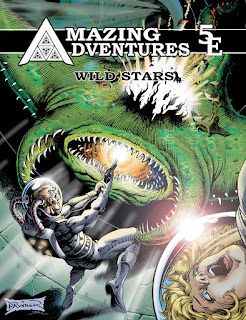 I also picked up Wild Stars, a setting sourcebook designed to work with AA5E and Solar Burn, introducing the "multimedia" universe by Michael Tierney (that I admit I had never heard of until grabbing this). Off-hand it's a problematic supplement: it contains a detailed system neutral setting over48 pages, but offers no rules or stat blocks for anything within. This is described as a deliberate design choice, but it was a mistake; the book is essentially useless to anyone who was hoping for a fully fleshed out setting and lacks time to figure it out themselves. If you want a generic setting sans toolkit you might find this useful, but for me it's a missed opportunity on a really interesting setting that lacks a game to play it with.

Anyway, if you like 5E (and it's hard not to enjoy 5E), like pulpy action, and want a flexible ruleset that handles a range of time periods within the pulp genre then you will get a lot out of this latest editiion of Amazing Adventures 5E. I'm really quite interested in doing something with it, although my keen reinvigoration of interest in GURPS is dividing my time in that direction.....but maybe not too far down the road if I can find a way to set it up in a VTT environment I might well throw this down as an option for my group, which I think would quite enjoy it. Besides which, if I were to run AA5E in a classic pulp environment I think GURPS Cliffhangers would make an excellent supplemental resource for it.

Posted by Doctor Futurity at 10:49 AM