The Many Days of Horror! - Return of the living Dead (NSFW) There are a few movies you can date yourself with in the world of geekdom. If you're a zombie fan for example, you can easily point to a few specific films as the source of one's obsession for the cinematically undead....plenty of older zombie fans can call out the original Night of the Living Dead, sure...but you know you're a product of the 80's if Return of the Living Dead is the one which stands out as your de facto zombie flick! Bonus points if you not only know who Linnea Quigley is but dreamed of meeting her at a convention. Triple points if you still dream of meeting her. She's the reason this blog gets an NSFW by the way. I could have left out pics of her but it felt s bit disingenuous.

It seems silly to me to review this amazing movie, since it's hard to imagine anyone who's a zombie fan who hasn't seen it, but I'll be honest: I have live humans at my game table, most of whom were born after this movie was released in 1985, who have either never seen it or never heard of it. Those people also liked the Evil Dead remake. So yes, it's time for some geek-vangelism!

Return of the Living Dead presented itself as a campy quasi-sequel to Night of the Living Dead, even encompassing a backstory that filled in the "real story" of what might have happened a decade and a half back, and how that story....told almost as if the guys working in the Medical Supply Warehouse were joshing the new kid....ultimately leads to the outbreak of an entirely new zombie uprising.

RotLD introduced a thick campiness to the film as many did in the 80's, and like a much smaller handful it pulled it off extremely well. The humor is black and infectious, and even the zombies get in on it. The film had a number of notable tropes and bits worth noting, as follows:

1. The Tar Man Zombie. He's still an amazing special effect, one you do not forget, and his FX still surpass most contemporary zombie films in terms of gory nastiness.

2. Smart Zombies. The zombies in RotLD are cunning, keep their wits about them even when their brains are rotting, and while they might be a product of chemical contamination their tenacious supernatural vileness is present throughout the film. These zombies feel their bodies rotting away and the only relief they get is to devour the living. Especially brains. And they will do anything they can to get those brains.

3. 80's Fashion at it's Worst! RotLD dates itself with almost delightful glee in the realm of 80's punk and pop...and while it was probably unintentional, I still recall in the 80's being mildly peturbed at how outrageous everyone looked. Keep in mind, I grew up in rural Arizona, so yeah: 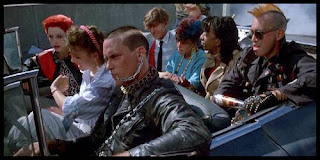 4. The Medical Supply Warehouse. Name three places you can set a zombie uprising. Graveyard? Check. Mortuary? check. Medical Supply Warehouse? Check and give yourself a golden genius star. Hanging cadavers...spliced dog schemata (or whatever it's called) all coming back to hideous unlife....protagonists who understand little things like embalming and rigor mortis? And a script which deploys the use of both? Excellent! 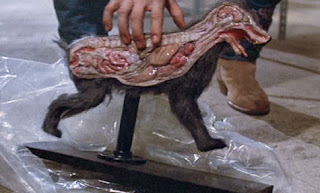 5. The Nuclear Option. I'm pretty sure RotLD was the first one to exercise this option directly against zombies.

6. Zombie Linnea. The reason I rank this blog NSFW but arguably its hard to make anything safe when we're talking about one of the great scream queens of the 80's! Linnea plays a punk rock chick who has a fear of being ravished by evil old men. She gets eaten by zombies again, who are scrupulously efficient at not marring her physical form so she can parade around nude for most of the film. 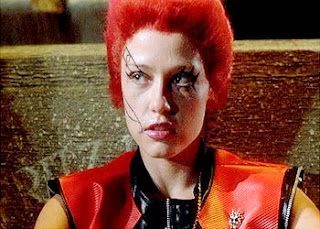 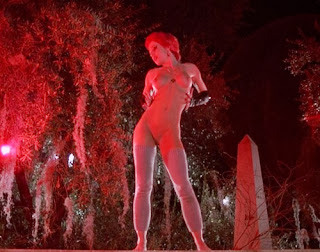 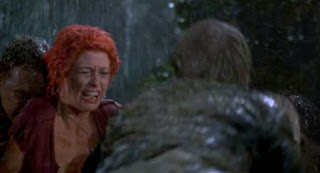 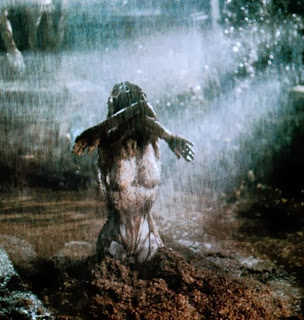 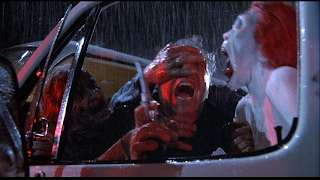 In short: best zombie movie ever, especially if you're a child of the 80's. Watch it, love it, and realize that long before all the zombie movies of the last decade, for a very long time this was one of a handful of true greats! 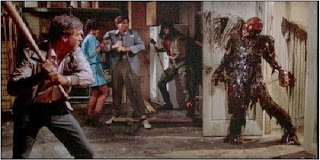 Email ThisBlogThis!Share to TwitterShare to FacebookShare to Pinterest
Labels: return of the living dead, the many days of horror, zombies