It's been a busy week at work, so naturally I haven't had much free time to post anything...and the work overload has spilled in to the evenings. Plus, just dogged tired!
Although I've written a lot lately on the OSR and Swords & Wizardry, today I am going to rest entirely in the Bleeding Edge camp of current game mechanics in all their strange glory...so today's micro-feature: 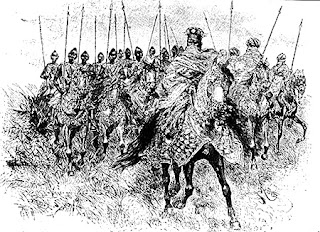 Goons in 4E (Or, bigger than a minion, smaller than a proper monster)

I was mulling over ideas on how to handle encounter combat in D&D 4th when the idea came to me that the minion idea (which I love) actually meshes well with the elite idea (which I also love) and the solo idea (which I am less fond of), but one step is missing: something in between a goon and a normal monster, we need a "half hit points" entry for "foes that offer a modest difficulty but which are still speed bumps, albeit a bit larger than the average minion."

In prior editions of D&D, DMs actually had one very useful tool for managing monster hit points: the hit dice. You could play it straight and roll for hit dice, letting the results fall as they might, or you could use the hit dice to assign certain monsters of a given type slightly tougher or weaker positions. By 3rd edition they standardized the idea of including "average hit points" in stat blocks so DMs could optionally simply pick the average HPs for a monster from the get-go.

In 4th edition, monster hit points are, like PC hit points, pretty much calculated from a formula that would translate (compared to prior editions) in to assuming everyone has maximum hit points, more or less (assumign the old standard of D8 for hit dice). Of course, you can make things tougher by doubling hit points (elites) or quadrupling (solos), or reducing them to 1 whole hit point (one hit kill wonders, minions).

So: a common problem in 4E combat is that it takes too long. This isn't always the case, however. The real problem is that all combat situations in 4E take equally long, on average, when in fact many combats should necessarily be shorter. I've heard lots of interesting work-arounds for this, and tried a few myself.

My new work-around is to introduce a new concept: the goon. The goon fills the space between a normal monster and a minion, having one half the hit points and being worth one half the XP of a regular monster. A goon is basically easier to kill, but otherwise has all the features and functions of a regular monster. It's subject to ongoing damage and effects, it deals damage with dice rolls, and so forth. It's main advantage is: it will die twice as quickly on the battlefield, and two goons are worth one standard monster, so you can bulk up your encounter with more bodies; they are technically going to be deadlier than a single monster, because two goons means two attacks where there used to be one. This will actually make them slightly more challenging, and an especially kind DM would probably not be without precedent to maybe mke them worth slightly more than half the XP value of a regular monster.

So, I'm going to try out some goon-driven encounters the next time I run a game. My theory is that goons will solve a few problems by virtue of their presence:

Speed up Combat: goons will die twice as quickly, meaning you are less likely to have that long, lingering stench of a battle past its prime. More specifically, goons are ideal for average or "incidental" encounters that are meant to be fun, offer some challenge, but not last very long. Wandering monsters could benefit from some goons on the chart.

Bigger Threat: as two goons offer two attacks but with the same HP value as one monster, then the overall threat from damage and attacks by the encounter can as much as double, making goons a bigger (if more readily eliminated) threat to PCs.

Substitute for Minions as Appropriate: I've found minions serve three neat purposes: to make wizards feel empowered, to scare the bejeezus out of the players when you put out all the minion minis (at least until they figure out they're minions) and to help replicate the classic moments of zerg-driven mob attacks typical of fantasy fiction, cinema and video games. Helms Deep, anyone? Goons, however, provide one more layer of options for DMs who want foes that will drop fairly quickly while still offering a challenge. Instead of an EL1 encounter with 5 level one orcs, say, you could make that same encounter with 10 goon orcs and the PCs will both be more challenged and still find it easier to dispatch their foes.

This is all theory for the moment! Gotta go, but hopefully I'll have an opportunity to test it out in a 4E game shortly.
Posted by Doctor Futurity at 12:32 PM