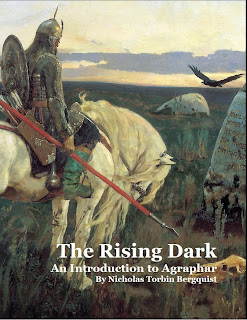 Much to my amazement I somehow managed to launch a project I've been working on for the last year. "The Rising Dark: An Introduction to Agraphar" is a side project I've been messing with since around February last year, when I had an opportunity at the time to contribute to another publisher's project (Peryton) for the Tunnels & Trolls RPG. After a month or so it became clear I wouldn't have the time to work on the project, but in the course of writing out ideas I developed a small sandbox-style region for a setting called "Calithar." Anyway, I couldn't really let it be, and several months later I had slowly developed the concept from a scenario setting into its own mini-campaign world.

The first iteration of the setting was designed for use with Tunnels & Trolls. The second iteration was tentatively going to work with OSRIC. Somewhere in August I re-adapted the whole thing over to 4th edition D&D and utilized the scenario elements in an ongoing campaign. By January of this year I had discovered Swords & Wizardry Complete (still can't stop talking about it!) and decided that this was the system that deserved to play mother to Agraphar.

I have a 4th edition version more or less complete (still needs editing work) but the Swords & Wizardry edition, as well as a free first issue of something I'm calling "The Sun Fury Gazette" are now up. I'm looking forward to seeing if there's interest in this sort of a product, and it seems that the OSR/S&W crowd is much more interested in setting, scenario and campaign content then the more modernized gaming market. I'm also interested to see how this format (50 page book plus a series of 6-10 page regular supplements priced very reasonably) works. If it seems to have legs, I may try to adapt my other settings to a similar format. The PDF market for role playing games is a weird thing, as it seems like gamers are far more likely to spend $2-3 on a 10-20 page sourcebook featuring one or two topics, than they are to spend $10-20 on big (200-300 page) sourcebooks loaded for bear with content. I won't argue...the preferred model makes content worth more over time, but its hard to break the habit of writing large volumes of interconnected material that's all meant to work together, in one package. Anyway, it's an experiment, and Agraphar is a new setting for me, one which has lots of exploration yet to come, so I look forward to it both as a writing and gaming challenge to evolve this little beast in to something bigger.
Posted by Doctor Futurity at 1:11 PM