The Growing Obsession with all Things DCC

While I've been running some odd menagerie of Pathfinder 2E, an occasional Starfinder game, lots of Cypher System, and recently 3.5 D&D back in the mix....on my own time I've really, really really gotten in to collecting and reading up on Dungeon Crawl Classics and its spin-offs. Like, more than normal, or is even healthy. I've been ordering most of the stuff from Goodman Games, chiefly because they are awfully inexpensive, have free shipping after $100 and include PDFs with almost everything.

Although there is much adieu about the whole Appendix N phenomenon and how it may contribute to the focus and feel of DCC and its brethren, the truth is I'd label it something more like, a "pre mid-eighties fantasy/sci-fi/horror" vibe. I say pre-mid-eighties because I dived in to the genres wholeheartedly around 1980 and never looked back, and by 1986 or so in high school had read so much vintage and (for the time) contemporary fantastic fiction that I was noticing lots of trends, from the "every fantasy epic must be Tolkien" trend on down to the rather prodigious level of insanity that was billed as horror for the time, and somehow marketed on the shelves at grocery stores (to be read by little old ladies who thought my fantasy novels were inducing Satanism, of course, even as they read stuff that made Rosemary's Baby look fairly tame). 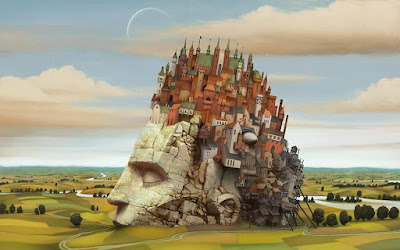 The point of this though is that DCC really does evoke the wild west feel of fantasy and scifi (and horror) for that period in time. The seventies in particular brought with it an explosion of new authors who had grown up on classic content and pulps as a natural course, and it was entirely possible in that era to write interesting fiction that was nonconformist yet readily picked up and marketed by major publishers. Today, you have to wade through endless self-published novels on Amazon's createspace to try and discern what is a self-absorbed vanity project and what might constitute good fiction. But back then? It was all potentially unique and fun, even when it was garbage (sometimes especially if it was garbage!)

So Dungeon Crawl Classics really does capture this vibe, and I love it. So does Mutant Crawl Classics, and other spin offs like Star Crawl as well. Under a Broken Moon (the Umerica post-apoc DCC books) are sort of amazing, like weird works of art, managing to evoke the sort of post-apocalyptic adventure we all actually thought we were having in Gamma World back in the day, even as Mutant Crawl Classics portrays the more super-science elements of GW that the game actually formulated around.

All of this, of course, is in addition to the excellent reprint and expansion of Metamorphosis Alpha, which while retaining its original game mechanics from the first edition is still utterly playable and also a great resource for MCC if you are so inclined to use it as such.

My obsession with this has me thinking hard about how to wrap at least one current campaign up so I can move forward....but it's a tough call. My weekly Cypher System game is suitably weird and interesting with lots of interesting plot and depth so it may wrap sooner than later if only because its so enmeshed in moving the story forward. I just migrated my Pathfinder 2E game to an adapted D&D 1st edition module which I converted over (more on that soon), and the old school retro vibe is working quite well for what I need that game to do right now. The 3.5 D&D game is proving that nostalgia only requires about 15-20 years for it to kick in, and is also scratching an particular itch. So I don't know when the DCC/MCC/CuaBM/MA itch will get scratched, but hopefully soon!

Posted by Doctor Futurity at 1:39 PM