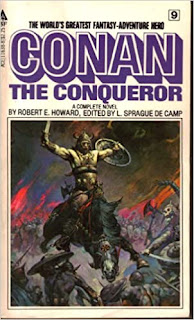 Every now and then something accidentally reminds me that one of my favorite fictional properties, Conan the Barbarian, along with one of my favorite genres (sword & sorcery fiction) has had the grainy, crusted history of a Maximum Fan Blowout for well over 60+ years now.

It starts, often, like this: I get something in an email or I am browsing my book or ebook collection and I notice one of my many tomes featuring tales of Conan. I have an extensive collection that includes the recent very thorough and illustrated tales of Conan reconstructed from Robert E. Howard's original publications, as well as the complete series published by Lancer/Ace in different editions. At one time I had virtually all of the Tor pastiche series books, though over time gave them up as to be honest, probably about 20% of them actually had merit and the rest bordered on painful, embarrassing reading.

The problem with Conan/Howard fandom starts with the Lancer/Ace editions. In the sixties the Conan property was revived by L. Sprague de Camp who presided as editor and writer in conjunction with Lin Carter and Bjorn Nyberg. Other authors of the time, including favorites such as Karl Edward Wagner also contributed tales to the Conan universe in this time (Road of Kings remains one of my favorites) and the revival got Conan effectively into print and mainstream for a time.

The Lancer/Ace series of 12 books were not only my introduction to Conan but also to Howard as an author (as well as Carter, de Camp and the rest) and my formal indoctrination into reading around age 9-10 as a major pastime. So for me, any criticism of this series is tempered by the fact that it server an incredibly important milestone in my life. Keep that in mind as we dive down the rabbit hole here.

So, when I look at these books, I am occasionally reminded that I would love to see the series released in a modern edition, something which is in better shape than the medley of aging, yellowed tomes with cracking spines I have on my shelf. Even an ebook edition would be great, right? Well....

The problem here is complicated, but it starts first with the really rabid fans of Robert E. Howard who for many and varied reasons took great umbrage with L. Sprague de Camp's control over the property and his rewrites of the Conan tales in these editions. A search online readily brings up countless archived and ancient posts and restorations of older writings pre-internet from various fans of Conan and Howard spend a great deal of time nit-picking de Camp's edits and rewrites of Howard stories in this series. The discussion on these ancient preservations are often shockingly impressive at just how grim and vicious they are.

Reading and getting worked up about these ancient diatribes is hardly worth it; many of the original authors lamenting the purity of Howard are dead or beyond any point where debate would have any merit at all. It is best to read them as a moment of fan frenzy captured in weird amber, a snapshot of what this looked like before the internet, from a time when chapbooks and fanzines were the medium of communication.

Still, it frustrates me. Regardless of how people felt about de Camp as editor and contributor to Howard's Conan stories, he did something of significant import, and I owe most of my interest and hobby focus for pretty much the entirety of my life to his adaptations of Howard's Conan into a coherent twelve tome narrative. I enjoyed de Camp's writing,* and though I also relish the intrinsic style and feel of Howard's original works I can see why de Camp made so many of the editing choices he did. I also quite enjoyed his own stories, even the ones which he rather heavily re-adapted into Conan stories from other non Conan writings of Howard. It's all good, essentially, and it is much of the reason I feel that today Conan is a thing many people know and love. Reading Howards original tales is a great experience, but de Camp made Conan work for a generation that was growing warm to the idea of trilogies and worlds built out over coherent narratives in a series, and Conan as Howard wrote him might very well have remained obscure and forgotten, much as almost every other character Howard created remains today.

Besides, I imagine that the wheel turns ever round. There is probably a nest of fandom right now stewing with seething rage that Conan is a Marvel character who you can (literally) find next to Venom and Wolverine, fighting side by side. I wonder what the old grognards of yore might imagine of such blasphemy.....for me, though, it is enough to know that a comic book with Venom and Conan has absolutely gotten my son to ask me, "Who's Conan" and that, in turn, has given me an opportunity to show him a much wider range of fiction, especially as he is reaching the same age when I, too, first discovered it.

*Lest Darkness Fall and The Fallible Fiend remain two of my favorite books to this day.

Posted by Doctor Futurity at 12:20 PM