This Right Here (The Last of Us Part 2)

Just a comment that today's Penny Arcade precisely encapsulates why I haven't picked up The Last of Us Part 2 yet: 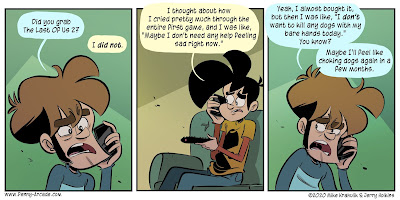 I feel bad for Naughty Dog. I bet it's an amazing game, but The Last of Us Part 2 was delayed several times, and I am sure they need to get it released before the next console generation comes crashing in, but this is precisely the kind of game I don't really want to play right now. It's not even a "horror" thing....it's the fact that this is a sequel to one of the most emotionally intense, depressing and miserable games of the last console generation, and the state of the nation (and world) right now just doesn't lend much room to voluntary misery.

Also, it probably doesn't help that we should all suspect a "TLOU2" remaster next year on the PS5. Just saying!
Posted by Doctor Futurity at 8:14 AM

Email ThisBlogThis!Share to TwitterShare to FacebookShare to Pinterest
Labels: penny arcade, the last of us part 2