Updated! This now includes all reviews, as well as the Thirty One Days of Horror reviews (following, below):

Justice League A
An unreliable narrator in this review affirms that while Avengers: Age of Ultron has much better fight scenes, this was a DC fan's best hope almost realized

Marcus Reviews: Emoji the Movie
I didn't see it, but my son did!

The Mummy (C-) and Transformers: The last Knight (D-)
These all but killed my movie summer interest.

Pirates of the Caribbean: Dead Men Tell No Tales C
This one started hammering the nails in the coffin before slipping and drowning.

Wonder Woman A+
Best DC movie yet. Possibly the best comic book tale this year (except for Logan).

Alien Covenant A+
A worthy continuation of the Alien franchise, managing to provide closure to Prometheus and paving the way to a stranger future than we might have suspected. Also a great Traveller low-berth hell ride adventure!

Kong: SKull Island B
Solid B for a solid B Movie!

Assassin's Creed B
Flawed but interesting movie with no sympathetic characters for the audience to latch on to.

Resident Evil: The Final Chapter B+
After the last five films this one felt positively civilized, with a no-nonsense, straight-forward apocalyptic survival tale hidden inside a wack-a-doodle franchise where people expect madness. What happened???

Rogue One: A Star Wars Story A
Relive the West End Games Star Wars RPG days as all your favorite characters from that game that ended in a TPK!

Morgan B+
The movie that explains why replicants are not to be trusted.

Appleseed Alpha A+
Proof that I have strange taste, or evidence of a new era of CGI cyberpunk anime worth watching? You decide!

Oasis of the Zombies D+
You see, Hastings went out of business and I bought a lot of cheap movies there before it shut down....

Suicide Squad A
Probably the truest comic-to-film adaptation I've seen yet, and a wild ride.

Ghostbusters (2016) A
A decent sequel/reboot with its own charm.

Warcraft A+++
Unexpectedly one of my top twenty favorite movies of all time. Whodda guessed???

Batman V. Superman Dawn of Justice A++++
My love for this film is unrepentant.

Teenage Mutant Ninja Turtles (2014) A
I have no investment in the TMNT franchise so this was kinda fun. Plus my wife has loved TMNT since she was a kid and loved this, so I take that as a sign it's not all that bad.

Riddick A+
I'm a Vin Diesel fanboy so keep that in mind, but I loved this movie (and even more after watching it a few more times).

Avengers: Age of Ultron A+++
I guess that makes the first Avengers an A++++ film, but either way it did not disappoint.

Man of Steel A+
I actually really liked this version of Superman and am annoyed I took other reviews at face value and missed it in the theater.

Pacific Rim C+
I wanted to like it more.

The Hobbit: Battle of the Five Armies A-
Best Warhammer Fantasy film ever!!!!

Star Trek Into Darkness C
It was fun. But maybe not Trek. Hard to say.

Evil Dead Reboot C-
I didn't like it but it was still decent...just not what a fan of the camp elements would want.

The Cabin in the Woods A+++
A necessary requisite film to see before viewing any more contemporary horror films, as they all fit in to the Cabinverse somehow

Conan the Barbarian (2011)  (B+ then, but now? No idea)
Curiously, I haven't been able to muster up the energy to watch it a second time. Hmmmm.

Supernova (B)
Better the second time around

Chernobyl Diaries (B+)
Do not trust Yuri the tour guide

Painted Skin: The Resurrection A+++
What an epic fantasy in Khittai should look like

The Hobbit: An Unexpected Journey
I liked it

The Avengers A+++
Like this needed a review. And in truth it really didn't get one.

The Thirty-One Days of Horror Reviews:

Here's a listing of the Thirty One Days of Horror reviews and the assigned ratings:

The Fourth Kind B+ (I didn't actually provide a rating, heh...but it's definitely a B+)
Creepy and slow, worth it for the eight minutes of genuinely freaky footage they do right

Survival of the Dead B
Fun if inconsistent Hatfield vs. McCoy tale set in post-zombie America

Resident Evil 4 A-
A decent reboot for the video game franchise, but a bit heavy on the action and escort questing

Leviathan C
Suprprisngly fun but by the numbers late 80's horror film, could have been better

2012 Zombie Apocalypse B (despite the awful CGI zombie tigers)
Unexpectedly fun zombie world tale from SyFy....who knew they could do stuff worth watching?!?!

Autumn A+
Surprise zombie apocalypse film, not your ordinary zombie flick, and slow to start but well worth if if you'd like to see a very specific type of genre done differently 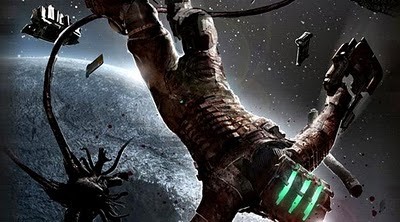 Monsters C+
So much potential squandered

Death Valley Season One A+++
Hysterial one-season tale of cops vs. the supernatural that deserves more attention and a second season

Resident Evil: Retribution B+ (but a solid D for coherence)
It's like sugary fruit loops for the soul and a spike through the heart 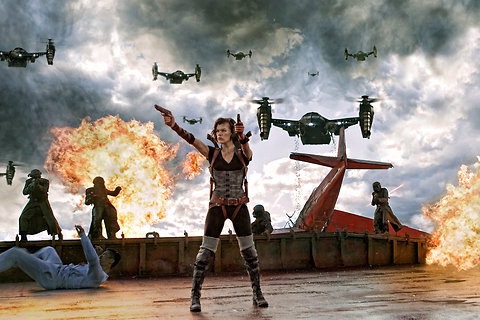 Admittedly, the sample is skewed to "A" ratings because I generally chose movies I either knew I liked or was reasonably sure I liked! The first-time viewing movies for me included Blood Creek, The Tomb, The Fourth Kind, The Reeds, Deep Space, The Terror Within, Leviathan, Monsters, Autumn, Midnight Movie, 2012 Zombie Apocalypse, The Lost Tribe, The Devil's Rock, Pandorum, The Thing (20111), and Resident Evil: Retribution.

Of the reviews five were about video games. I didn't end up reviewing specific novels, instead providing some suggested reading ideas as related to the movies.

I still have a bunch that didn't get reviewed, and will continue to offer up more reviews at a more liesurely pace! A blog review a day for a month was an onerous task; luckily I front-loaded more than half of them with reviews of movies watched during a couple marathons in September. This will explain how I was able to power level a character to 50 in Rift in October and still yank 31 blog reviews out of the ether.