In messing around with Starfinder I decided to see what higher level characters would look like. The game's damage scaling is maddeningly weak at low level (with the caveat that some classes have spell or special effect limited-shot boosts to help out) but it was clear from the weapon tables and level bonuses later on that PCs must scale up....quite a bit, perhaps. But what does this look like in an iteration of D20 System that has ditched iterative attacks entirely?

Enter Delevan Trask, a sample character I leveled from 1 to 10 to see what an average soldier with the mercenary theme might look like. Trask is a human, so nothing particularly special here to note other than that a Vesk might be a better overall soldier..... 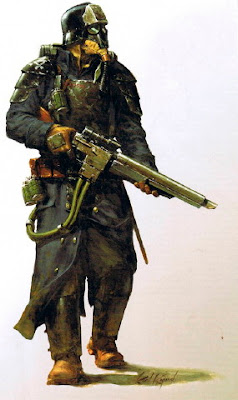 So...Delevan has a lot of abilities which I summarized with the various special titles/feat names above, but the short version is sort of like this: Trask can get a boost going melee against a foe he has already shot (opening volley), he can move around in combat while attacking (nimble fusillade), he can protect himself from attacks of opportunity when attacking (duck and weave), he can imbue weapons with a basic magic property (rune of the eldritch knight), he is a better shot with laser weapons and knows how to use electric attacks for effect (laser accuracy and electric arc), and his mess of feats make him tougher, better equipped with all weapons to deal more damage and hit with greater precision, go sooner in combat, hit extra opponents on a cleave, and his best feat is deadly aim, in which he adds his BAB (10) to damage when using a full attack action. Oh, and he can throw together crude but protective barriers quickly for some nice cover (barricade feat). WHEW.

The book suggests a level 10 PC has 66,000 credits to spend (page 391) but this seemed a bit stingy so take note that Delevan Trask is armed with about twice the gear he is supposed to....closer, perhaps, to a PC of actual level who geared up through play. If you want to view him at the appropriate "wealth level" then remove the pistol, dermal plating and maybe the longsword (replace with a lower level blade of level 7ish or less).

Delvan Trask, with a full-round attack, can deal 5D4+20 fire damage (using deadly aim plus associated modifiers like specialization), for an average of 32-33 damage per attack if he has a decent spot to shoot from. A full attack lets any character in Starfinder shoot/attack twice with a -4 penalty, so Trask could roll at +9 to hit but potentially deal 65 points of damage per round.

According to Starfinder's encounter building rules a single CR 9 opponent should technically be a match for our intrepid soldier. In looking through the Alien Archive's tables for combatant-based templates  I see that a typical generic CR 9 opponent from the combatant statistical array would look something like this: 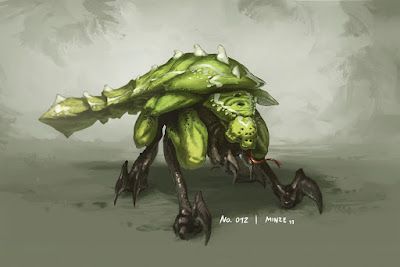 Xenovore
Murder Alien CR 9 (animal)
EAC 22, KAC 24, Fort +13, Ref +13, Will +8, HP 145 (NPCs don't have SP)
Ability DC 16, Base Spell DC 13
STR +6, DEX +4, CON +3, INT -4, WIS 0, CHA 0
Senses low-light vision
Special no breath
Attacks:
Ranged Alien Death Spikes +21 (60 feet; 5D4+9 P)
Melee Claw +18 (1D10+15 S)
Multiattack 4 Claws +12 (1D10+15 S)
Xenovores are indigenous to various worlds where they have been dropped off by unwitting merchant ships, traders and smugglers who did not know that the beasts had attached to their hull. They look like armored hulks of moving muscle with four vicious claws. Their proboscoid "mouth" is not effective for combat, and the xenovore secrets a digestive acid on slain prey, then suctions up the liquid mess after an hour or so with its proboscis.
(I'd just like to comment that this monster was drafted up in about 8 minutes using the incredibly flexy and easy to use array design rules in the back of the Alien Archive)

The example creature is drawn from the design rules in the back, and represents an average space monster. This one can dish out four attacks per round with its multiattack claws for an average of 20.5 damage per claw, or 82 points of damage if all four claws connect. It can hit at range for 21-22 piercing damage with a weaker but more precise ranged shooting spike attack. This thing is lethal at close quarters!

I'll let you do the math, but this will be a tough fight for Trask if he doesn't find high ground and stay out of melee range.

So....this has led to an observation about Starfinder that sort of undermines my low level experience with the game so far: mid to higher level the game gets really interesting. Not that I doubted that, but the damages not only look more "Pathfinder-y" but they look more like you might expect damage to be in a heavy hardware future tech setting such as Starfinder. It makes me intrigued to consider starting a Starfinder game at higher level just to see how that feels.

That, or I could make higher level gear available (cheaper?) at low level. There is absolutely nothing in the rules preventing that, other than some commentary on page 167 suggesting that the GM beware if he allows this.

Things to consider. (And yes, this means Starfinder, I ain't quit ya' just yet....I may end up never running SF again, but I concede I'm having a lot of fund messing around with it mechanically.)