Modifying Monsters in Pathfinder 2E - Round One


Pathfinder 2nd Edition introduces a range of rules in the Gamemastery Guide that let you design monsters according to the new monster design mechanics, which are aimed at challenge-appropriate builds in a process similar to (but more structured) D&D 5E. The end result is that you get "numerically on-target" stat blocks through a kind of reverse engineering; rather than building from the ground up you sort of design from the top down, asking "What do I need?" rather than "What can I make?"

The trick is...this can be a bit enigmatic if you're not sure how to interpret all the data the GMG provides on this. As it turns out, I found that by using some scaling assumptions with standard Bestiary creatures you can get a much better grasp on intent, and also which monsters fill which niches.

For example: the Orc Brute. A CR 0 creature, is designed to be a very low level foe for level 1-3 characters. After about level 3 they are serious fodder. Recently however I ran a game (level 15) in which a major conflict and battle between three warring factions took place, which included an army of orcs. The orcs as presented were mostly grunts and low level, so the players got a moment to shine as true heroic badasses on the battlefield. However, having a percentage of the orc population be heroic foes in their own right would make for a more engaging and risky conflict. As such, I thought about ways to bulk up the monsters....imagine, for example, a "heroic" version of the orc brute.....I started by assuming it was a CR 14 monsters, and boosted it accordingly using the guidelines. It seems like the simplest default is to add level to all relevant stats, then add additional modifiers based on reasonable proficiency levels. When done this way and compared to the charts in the GMG you can quickly assess intended level and scope of threat of the foe as it advances in experience.

When an orc brute grows in power he thus becomes an Orc Greater Thane. As I developed the character it became clear that adding an extra ability for a multi-action attack would make sense; this gives them some extra striking power while sticking to the core conceit: brutal thugs that beat things to death with their orc-brand cestii: 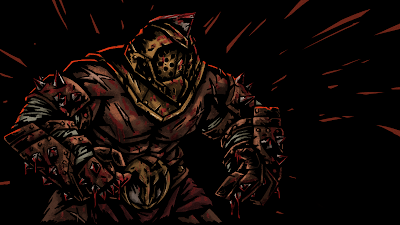 And just like that you have a mook designed to fight level 15 characters and be a sufficient challenge that they aren't a total waste of time, while also not being enormously overpowered.

I'm going to explore some more evolutions like this as things roll along. In PF1E there were a number of books Paizo did (such as Monster Codex) that did something like this; perhaps we'll get lucky and Paizo will do more such tomes in the future.