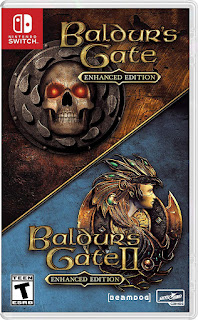 This week Beamdog Software, responsible for the enhanced editions of beloved Obsidian classics Baldur's Gate I and II, Icewind Dale and Planescape: Torment releases console editions of all the classic AD&D 2nd edition-powered RPGs from roughly 1998-2000, easily some of the best and most innovative RPGs for their day, and still some of the best iterations of D&D today, as well as shockingly good to enjoy even now, as long as you're in to isometric RPGs.

If you don't know and don't feel like googling it, isometric RPGs are effectively "top down perspective" games which in this case happen to be RPGs; there are lots of other isometric games out there, but this subgenre focuses on elements with a bit of more conventional CRPG design mixed with real time strategy and turn-based combat. For their time, the Obsidian AD&D game titles were well regarded for how they allowed you to play in real time and pause when things got too interesting or required your intervention....which was often a lot. Back when I first played these games, I set the parameters for when the game paused to "most situations" by default...I liked keeping careful control back then.

Thankfully that level of granularity works in my favor these days, as I prefer less control more than anything. The new versions of these games aren't really "new" anymore, either....and odds are if you lurk in blogs like this you already have played these games or own one on some form of device in the last decade or so; the enhanced editions and originals have been available on PC in digital format as well as tablet for some time now. Moving them ton consoles is a brilliant move, though; Beamdog had to design the ports with a controller in mind, and anyone who has seen how Pillars of Eternity and Divinity II: Original Sin handled this know that the current conversion method actually makes for a better, more intuitive set of controls than you get on a mouse an keyboard. Take that, PC master race!

Ahem....so the console ports I picked up are on Switch, which adapts the resolution of text appropriately and makes it possible to play handheld and still read it (old gamers may still need reading glasses). The game on a TV looks fine, but maybe not as good as I can experience on 4K resolution through my GOG edition, but honestly? I'm here for the ridiculously intuitive controller setup.

I won't bother reviewing the games beyond mentioning that a few hours in to Baldur's Gate and it all runs quite well. I'll try the others out as well, soon as I can find time (yes, somehow I found the money to grab them but time....time is indeed precious...!) Baldur's Gate is proving to be the experience I remember from my multiple prior playthroughs (fair disclosure: I've only beaten the original once) and I actually feel emboldened by the superior controls and portability that I may at last get to replay Baldur's Gate and Icewind Dale as well as play and finish for the first time Baldur's Gate II and Planescape: Torment. Yes, you read that right; I have not played either of the latter two games; I had even less time in the late 90s'/early 00's for computer gaming and a cruddy Mac for my computer, so my options were slim! But luckily thanks to these new ports I think it is at last time to make some room on my schedule.
Posted by Doctor Futurity at 7:46 PM