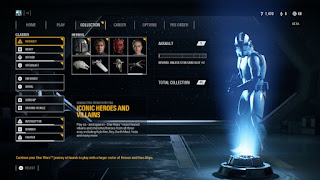 This is a topic that's been making the rounds recently, thanks to a sudden explosion of AAA games with very finely tuned Loot Box systems aimed at getting Real Money out of you. The most egregious example under discussion is the loot crate system in Middle Earth: Shadows of War, but Star Wars: Battlefront II is coming in at a close second with a randomized loot system that awards what appear to be very advantageous "pay to win" bonuses. In fact most big budget games coming out in the next few months are going to have some form of loot crate system in place.

This isn't new, of course....the loot crate concept has been gaining steam for a while now, and it's been in place in the Call of Duty franchise, Overwatch and other games for a few years. MMOs have been abusing the loot crate concept for a while now, and layering it with multiple forms of specialized currency, each with their own rules that are ultimately designed to get you, the player, to part with more cash. Many of these games have so far shown restraint, offering up purely cosmetic options in their loot crates.....but this season seems poised to change all of that.

There are people who see pros and cons to loot crates. One of the identified "pros" is that it's a mechanism for people who have more money but less time to stay competitive. Actually, that's the only one I can think of (or find), offhand. The publishers of these games try to spin it as a choice issue.....sure, you can buy our loot crates, they say....but you can also just play the game, acquire currency, and then get the crates in-game without spending any money.

There's a problem with these viewpoints, of course.

The first issue, and far and away the most important one to keep in mind is: the game develpers (and publishers) are in total control of this process. They set the bar for how much time it takes to grind for content (loot crates), vs. how much money it will cost to bypass the time process, and what you get if you are buying what amounts to randomized blind bags. Parents of children in today's world know of the concept of the blind bag/collectible toy conundrum: it's the way a toy manufacturer gets your kid to buy 20 blind bags to get the 8 toys they actually package in the bags (numbers will vary). If they just sold you the 8 toys you'd spend your $5 a pop, but if you don't know what you're getting, it may take you 20 or more purchases to get the same 8 figures....thus putting you in the hole for $100 or more to get the same collection.

Kids are especially susceptible to this predatory marketing tactic, due to the fact that they have not yet developed enough (mentally, emotionally and in the manner which allows them to accurately assess the risk factor of their behavior, especially in abstracts like this) to really appreciate just how insidious this is. As a parent your best bet is to step in and provide the breaks, the controls to the behavior.....but it's not easy, and you can't always be there to remind them that spending all their hard earned money on what amounts to a mess of duplicate toys for the chance of that one figure they are missing is not a good idea.

Add this process to video games, which have an insidious additional mechanism to incentivize you to purchase loot crates by making the grinding process onerous and soul crushing, then add in a large number of kids and adults under 25 (who are still mentally developing their ability to assess risk, and the publishers know it) who may be especially susceptible to falling for a gambling tactic thinly disguised as gamification, and you have a recipe for predatory sales practices aimed at pure exploitation.

"But I don't want to grind for loot, and I have limited time but am willing to spend money to get the crates," you might say. Don't worry, they have you covered! They will insure that the grind is excruciating, and only the most die hard and penniless players will suffer through this process. For the rest of us, we fall in to two categories: people who will never pay for loot crates (a small minority) even when the game provides plenty of bait in the form of some free currency or free crates to try and hook you in....OR you stylize yourself sufficiently well-to-do that you are willing to spend what it takes, even if that could be in the hundreds or even thousands of dollars. Maybe you don't do it all at once, but over time? Sure, it will add up. You might even style yourself one of the legendary whales, the term marketing in games uses to refer to that golden player who is willing to shower their product with cash to "get it all."

If you're one of the few guys in the middle who will play the game and refuse to buy loot crates....congratulations on the self control, it's hard for most players to accomplish this, but you're one of them. Unfortunately the game no longer cares about you. If you paid for the base game? That initial $60 purchase, maybe with a season pass, was the money they knew they could get out of you already, and they got that. Now you either buy in to the game, or play it until you're no longer relevant. Odds are you won't be around that long, anyway, because you value both your time and your money, and realize that the game does not respect your time and it desperately wants your money.

So next time you're playing a loot crate styled game, keep that in mind: every single step along the design process was aimed at getting you, the consumer, to play the game the way they want it. So the question is not "grind vs. pay," got it? That's an arbitrary distinction that was built in to the game to make you think you have to grind or you have to pay. They did not have to make it that way, but they did, to give you the illusion of choice here.

A lot of the new games being criticized are only just now about to come out. We'll have to see what the landscape looks like in the next few months, if these games prosper or wither and die. Unfortunately I am not betting on the latter. The psychology of addictive behavior, combined with the cunning manipulation of gamification, suggests that this approach will continue to prosper. Our best best for those like me who are getting tired of this predatory design practice is to continue to purchase and enjoy the games that have not yet fallen victim to the loot crate design philosophy. 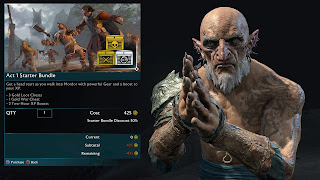 On the plus side, there is (as yet) still no way for this kind of nonsense to affect the tabletop RPG experience....
Posted by Doctor Futurity at 1:46 PM